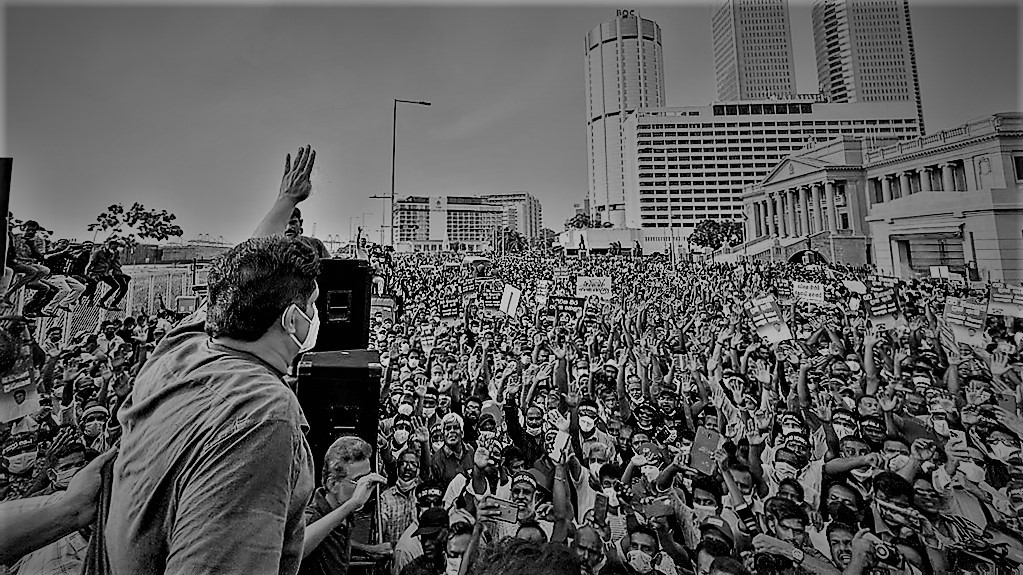 Colombo (17/3-57.14) Mindless actions and senseless words were emitted by the SJB leadership during the SJB riots of 2022 – an event termed as a Covid-19 Super-spreader by the US Centre for Disease Control and Prevention.

In a classic notion of political opportunism, Sajith Premadasa, the leader of the Samagi Jana Balawegaya (SJB) attempted to fan the flames of the suffering Sri Lankan citizen to quench his thirst for political power. Hailing from a well-known political family in Sri Lanka, Premadasa was defeated in the 2019 presidential election by former defence secretary Gotabaya Rajapaksa.

Incompetency in the current political administration in Sri Lanka has led to double-figure inflation and mounting debt – a crisis worsened by the tourism industry collapsing due to Covid-19 and the conflict in Ukraine. Amidst the chaos surrounding the Sri Lankan issue, like vultures attempting to steal the show, Sajith Premadasa and his defeated opposition came out with a major call for widespread protests against the Sri Lankan government.

Large scale spending was undertaken by the SJB whereby thousands of posters were printed, short political dramas were produced and SJB advertisements were disseminated via TV and radio.

The people of Sri Lanka ousted the previous Yahapalanaya government, including Premadasa, in 2019 after the administration failed to secure the nation from a massive terrorist attack. The Easter Attacks of 2019 crippled the peace in the island nation following the decades-long civil war. At present, Sajith Premadasa is attempting to make the people forget his failures by doing sleight of hand tricks in the political space. The Easter Attacks that occurred under the previous government’s watch was the biggest ISIS terror attack outside of Iraq and Syria.

The SJB and Premadasa were involved in extensive misinformation campaigns to agitate and rile the public into bulk purchasing and panic buying of necessities that fundamentally struck the supply change leading to massive shortages. Shortages were followed by increasing prices for necessary food, energy and other products.

On the other hand, the SJB was involved in colluding with trade union leaders, especially in critical industries including the Ceylon Electricity Board (CEB) and teachers’ unions. Upon instruction of Premadasa, the teachers’ union leaders went on strike against the government and purposefully abandoned their responsibilities in schools and universities in order to dismantle the nation’s education framework.

Likewise, the CEB workers were instructed to go on strike and purposefully disrupt the Sri Lankan power supply. Following this, the SJB then blamed the government for the power outage and branded Premadasa as the most appropriate politician to be president, thus attempting to cripple the image of the incumbent.

The efforts to sabotage electricity and energy supply by the SJB were so prevalent that Minister Namal Rajapaksa, Minister for Youth and Sports, claimed that there exists a conspiracy behind that nation’s power outages as the government has provided everything that the CEB requested for.

Premadasa’s strategy is one in line with his father, Ranasinghe Premadasa, president of Sri Lanka in the late 1980s, who had betrayed the Sri Lankan citizen by clandestinely arming the LTTE terrorist organisation, who in turn used those funds and arms to massacre innocent Sri Lankan civilians.

The SJB’s greed for power is doused in utmost clarity whereby the party has demanded the government integrate the opposition (who lost the elections) into the political decision-making process. The SJB has issued an ultimatum that if the government fails to conduct the above, they will initiate Arab Spring-style protests across the nation.

The SJB has advocated for Arab Spring riots and armed revolutions against the government – a sense of great irony for a man whose father assassinated tens of thousands of Sri Lankan youth when they attempted to revolt against his presidency in the 1980s.