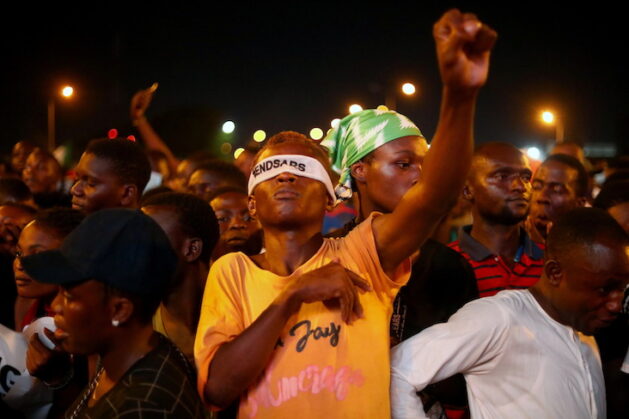 The attack on protestors last night is a new chapter for the #endSARS protests, with far-reaching consequences for the future politics of the country.

Videos emerging from last night’s shooting are difficult to watch.

The voice of young Nigerians tremble as they sing the national anthem next to the Lekki Toll Gate.

Shots ring out as uniformed men surround them, barricade them in, and open fire.

Images of men and women, wrapped in Nigerian flags, soaked with blood.

Unconfirmed reports suggest at least ten people have been killed. More certainty surrounds the dozens of protestors in critical condition in hospital.

Today, Lagos is on fire, and the shooting continues.

The National Ports Authority building at Marina is also on fire. As is the TVC television headquarters, and several banks.

The palace of the Oba of Lagos, the traditional leader of the city, has been sacked, according to local media reports.

What happened at Lekki Toll Gate

The Lekki Toll Gate had been occupied by protestors for several weeks, since the early October intensification of the anti-police brutality demonstrations.

It has been a good natured affair; well-disciplined demonstrations, whose dispersed leadership has been constantly reminding those present not to give the police any excuse to intervene.

Local newspaper Punch calculated that the state government had lost N234m (around $600,000) because of the closure of the toll gate since the start of the protests.

Around midday on the 20th, the current Governor, Babajide Sanwo-Olu called for a 4pm curfew, claiming the EndSars movement had been infiltrated by criminals.

At 3pm, the cameras from the Lekki Toll Gate were removed.

Just before 7pm, the lights at the gate were turned off. Soldiers arrived, and started shooting.

“It was pandemonium and they kept on shooting and shooting at us. It lasted for about an hour-and-a-half and the soldiers were actually taking up the dead bodies”, an unnamed witness told the BBC

A clearer video of the massacre💔💔

This is how they murdered our brothers and sisters!!!

We will not let this slide!!

The premeditated nature of the attacks – the curfew, the warnings, the removal of the cameras – is driving deep anger in Lagos.

A national leader of the ruling APC with presidential ambitions, Tinubu is believed to hold an economic stake in a number of the businesses now targeted by protestors; including the Oriental Hotel, the BRT, the TV channel TVC and the Lekki Toll Gate itself.

Speaking on Channels Television, Tinubu denied he was, “part of any carnage. I will never be part of that.” He also denied having any investment in the toll gate.

Of interest to demonstrators, but also to any legal inquiry: who could have ordered an attack that was carried out by soldiers?

The Nigerian army was quick to label as fake news any reports of demonstrators being killed – despite the many eye-witness accounts.

On the 18th October it was reported the army was to intervene in the #endSARS demonstrations, adapting an ongoing deployment called Operation Crocodile Smile VI.

Acting Director Army Public Relations, Colonel Sagir Musa said the deployment would begin on 20th October, and that the army is “is ready to fully support the civil authority in whatever capacity to maintain law and order and deal with any situation decisively”.

An open letter to the Chief of Army Staff of Nigeria, General Tukur Yusuf Buratai, by academic and editor of African Security ‘Tope Oriola had pleaded against allowing the army to join the police in repressing demonstrators:

“General Buratai, if soldiers on the streets kill a single civilian, the responsibility will be on you in the medium to long term when we all begin to give account of this moment at a truth and reconciliation commission or the law courts in Nigeria or The Hague. The statement issued by Colonel Sagir Musa will become incontrovertible evidence of your culpability in civilian deaths. President Buhari will likely receive soft landing for purposes of political expediency while you are held responsible for issuing orders that led to civilian deaths.”

What will the Lekki Massacre Change?

Throughout history, massacres have certainly turned political tides. But it is hard to predict in which direction.

The Tiananmen Square massacre strengthened the hand of those wanting to slow reform.

In South Africa, the Sharpeville massacre in 1960 pushed South Africa out of the international fold, while the Soweto massacre marked the beginning of the end for the Apartheid regime.

In 1819, the Peterloo massacre was a turning point for UK democracy, while France’s revolution was preceded by brutal repression of revolt.

Some will be looking to recent lessons from Algeria and Sudan — where slowly-building protests climaxed into weeks of pressure from a broad societal coalition, which ultimately forced changed at the top.

Is this a turning point for Nigeria’s politics?

It is hard to see the massacre silencing supporters – in the era of social media, these images will be shared again and again, and the outrage hard to tamp down.

Even if a revolution is not forthcoming, there will certainly be electoral consequences. The coming youth bloc in Nigerian politics is increasingly engaged.

They opened fire on Peaceful protesters in Lekki who were out, singing, dancing, cleaning the same grounds Daily post protest! Protesting #BadGovernanceInNigeria & #PoliceBrutalityInNigeria #EndSARS whilst Terrorists Get Pardon and rehabilitation! #LekkiMassacre pic.twitter.com/Oj2nrdfdCc

President Buhari – a 77-year old ruling a land where half the population is under the age of 19 – can himself count himself the beneficiary of youth support in his own first electoral victory, when a coalition of youth activists came together to help eject Goodluck Jonathan.

Impact of a Biden Presidency

One factor that is yet to be fully appraised is the upcoming US presidential elections. What does a Biden foreign policy look like?

In a statement released today, Biden says “I urge President Buhari and the Nigerian military to cease the violent crackdown on protesters in Nigeria, which has already resulted in several deaths. My heart goes out to all those who have lost a loved one in the violence”.

Where strongarm dictators worldwide have had a pass from Trump, what consequences will there be for violent repression of protestors under Democrat foreign policy?

“Under Trump, US interest in Nigeria have narrowed to encompass just trade and investment, and security and counterterrorism”, says US intelligence expert Matthew T. Page. “If Biden wins, Africa policy will be guided by a cadre of seasoned experts who understand what a normal, balanced response to tragedies such as this should be. And they will be looking to make clear that US interests in Nigeria are holistic: it is impossible for bilateral investment to thrive and security to improve amidst chronic governance failures and state-sponsored human rights abuses.”