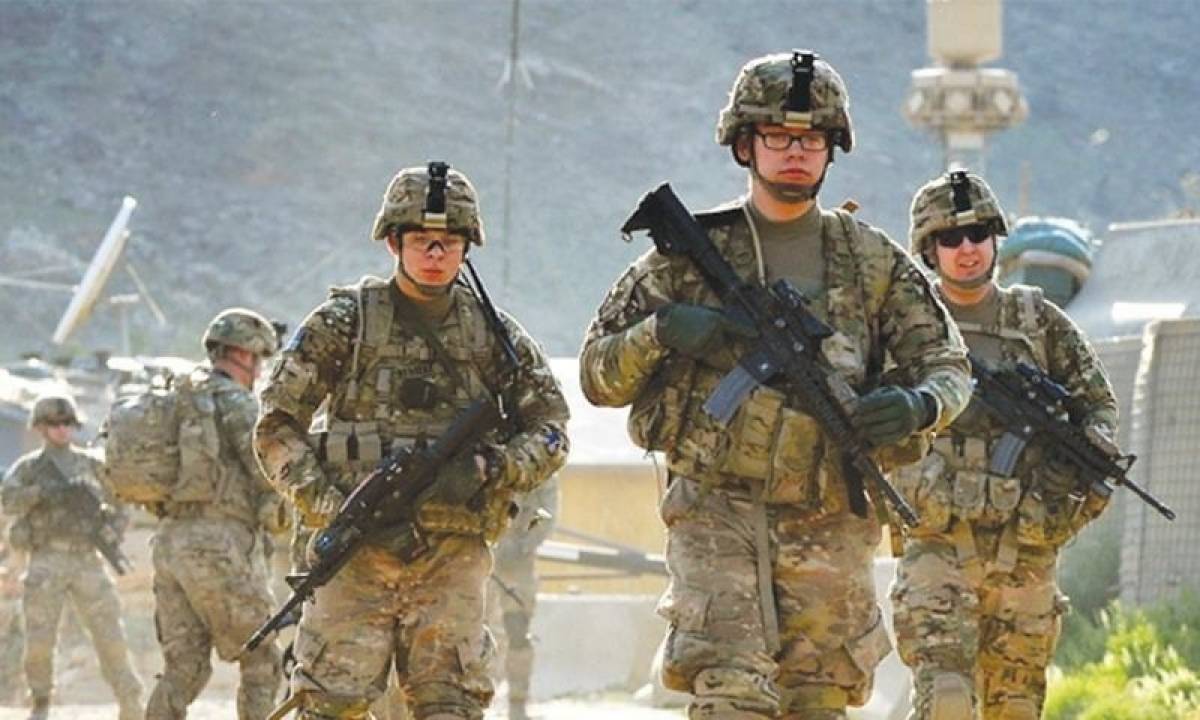 Years from now, we will forgive historians who, when documenting the Donald Trump presidency — its cold indifference to hundreds of thousands of Covid-19 deaths, its pandemic denialism, its migrant family separations, its use of the Justice Department as a political cudgel and the attorney general as a Mafia lawyer, the president’s genuine attempt to subvert the 2020 election results, and his impeachment — fail to note a bureaucratic dust-up between the Central Intelligence Agency and the Pentagon in the waning days of the administration.

Last week, news broke that Trump’s acting defense secretary, Christopher Miller, sent a letter to the CIA notifying the agency that the Pentagon would review the terms of its military support to CIA operations. News reports suggested that the Pentagon was planning to strip the CIA of its support for counterterrorism missions around the world almost immediately. Drones, elite soldiers, fuel, and medical evacuation of casualties, for example, would disappear almost overnight. CNN reported that the Pentagon was “planning to withdraw most support for CIA counter-terror missions by the beginning of next year.” The New York Times suggested that the purpose was to “make it difficult” for the CIA to conduct its covert war in Afghanistan as Trump reduces the number of U.S. troops there. ABC News described the decision as “unprecedented.” The cuts would leave CIA paramilitary officers to die should they suffer casualties, former officers told the press.

But interviews with six current and former national security officials, including some directly involved in the Pentagon’s review, suggest it is neither immediate nor controversial. Instead, the review serves as a coda for the Trump administration’s chaos — and as an unintentional gift to the incoming Biden administration.

Miller’s letter to CIA Director Gina Haspel informed her that the Pentagon would update a classified 2005 memorandum of understanding outlining the terms of Defense Department support to CIA missions. The Donald Rumsfeld-led Pentagon wrote the memo in the early years of what the George W. Bush administration called the global war on terror. In the immediate weeks and months after the September 11 attacks, the Pentagon discovered that it had neither the intelligence capability nor the nimbleness that the CIA showed in their quick deployment to Afghanistan, where Osama bin Laden and Al Qaeda conceived of and trained for the attacks; the CIA needed special operations forces to buttress their tiny paramilitary division.

As the Pentagon and CIA footprints grew in war zones, defense officials grew concerned about how soldiers and resources slipped into CIA operations without the department’s notification. The two sides struck a deal and the memorandum of understanding was born. The memorandum was spearheaded by Stephen Cambone, then the undersecretary of defense for intelligence, and one of his top deputies, Lt. Gen. William “Jerry” Boykin, who coordinated their secret programs with the CIA, and then established an agreement where the Defense Department would share personnel and other military support to the agency. The purpose was to expedite and delegate the authority to pass Defense Department personnel and resources over to the agency. As part of the new framework, the Pentagon also outlined the terms of how special forces soldiers, for example, might be loaned to the CIA’s paramilitary division and deployed to Afghanistan or Iraq, where they would operate under the intelligence agency’s authorities. In the ensuing years, the CIA and the Pentagon developed a close working relationship on and off foreign battlefields as two consecutive administrations spent at least tens of billions of dollars on a secret ecosystem — tools, weapons, and people — for killing.

Fast forward to Donald Trump. He campaigned in 2016 on pulling out U.S. troops from the wars which began after 9/11 and later, as president, declared victory over the Islamic State. In 2018, the Pentagon, led by Defense Secretary James Mattis, published a new national defense strategy as a blueprint for a new era. Counterterrorism was no longer the country’s “primary concern.” The new strategy called long-term strategic competition with China, Russia, North Korea, and Iran the top priorities.

But as with all things in the Trump administration, chaos reigned, and the tension between Trump’s policy-by-tweet and his national security officials, including those he once fawned over, caused constant confusion and internal conflict. Mattis resigned after Trump announced in December 2018 that the United States would unilaterally remove its forces from Syria, leaving America’s allies, the Kurds, vulnerable to slaughter by Turkish forces. Trump withdrew some troops but not for almost another year and under a new defense secretary, Mark Esper. The forces in Syria only moved to neighboring Iraq. By then, it was clear that Trump wanted to end America’s forever wars, not out of some secret humanitarianism or morality, but rather to save money and make U.S. foreign policy, especially in the Middle East, much more transactional.

Trump reportedly tried several times to pull troops out of Afghanistan but was said to have been blocked or slow-rolled by the national security establishment. After he lost the November election, Trump fired Esper because he was said to have resisted the move. As a result, Miller replaced Esper and quickly went about announcing that troops were indeed coming home. As almost an afterthought, Miller and the acting undersecretary of defense for intelligence, Ezra Cohen-Watnick, also pushed to update the 2005 sharing agreement to fall in line with the change in national security policy, several defense officials told The Intercept. They said that fears of resource cuts to the CIA are unfounded overall.

“We could come out saying we’re going to do more [support for the CIA] because it’s more costly to go after Russia and China,” a senior defense official with knowledge of the review told The Intercept. “If you look at 10 years, it will probably be increased because it is more costly to do these things, and the risk is higher against the state actor. The only group that is hyperventilating about this are a small group of people who have become [counterterrorism] focused.”

A secondary justification for rewriting the agreement is to allow the Pentagon to answer a simple question that has plagued military officials for years: How much support do we provide to the CIA, and how is it used?

“We’ve been trying to get a handle on what is the totality of what we’re giving,” the Pentagon official said. “And nobody knew. We realized that we had lost track of how much was being given over the years. We have no idea, but it’s enormous, and that freaked people out because it’s like, holy shit, this has totally run away from us.”

For military officials, the support to the CIA has become just like any other part of the Pentagon’s self-licking ice cream cone: one with no end. The agreement has persisted for 15 years, even as national security priorities have changed. Two military officials who spoke with The Intercept said the Pentagon couldn’t answer congressional committees’ questions about how the CIA used the Pentagon’s resources. As a result, the new memo will insist that the CIA provide more information to the Pentagon on where and how their support, including forces, is used.

“If you want our huge amount of resources which we provide you — [and] it is a good partnership — you need to tell us what our people are being used for, on a real-time basis, so we can assess whether or not it is legal, whether or not it’s a good budgetary decision, whether it is a good use of resources,” the senior Pentagon official said. “We don’t have any of that.”

According to the senior Pentagon official involved in the review, the Pentagon is asking the CIA to use military support in the so-called great nation competition and use fewer resources in their counterterrorism efforts. It is all part of a more considerable effort to move the military’s resources away from hunting suspected Islamic militants worldwide and toward the now two-year-old focus on other global powers. The military is letting the CIA know that they are ending its forever wars in a strategic sense.

“[Director Haspel] wants out of the war on terror,” the senior Pentagon official continued. “She thinks that takes the CIA away from its core mission of going after Russia and China. And it’s 20 years later, and we had to do [that] at the time, it’s 20 years now, and a shift has to be made.”

A CIA spokesperson, asked whether Haspel indeed believed the war on terror had taken the agency away from its core mission, referred to a speech she gave in 2018. “Another strategic priority,” Haspel said at the time, “is to invest more heavily in collecting against the hardest issues. Our efforts against these difficult intelligence gaps have been overshadowed over the years by the intelligence community’s justifiably heavy emphasis on counterterrorism in the wake of 9/11. Groups such as the so-called Islamic State and Al Qaeda remain squarely in our sights, but we are sharpening our focus on nation-state adversaries.”

CIA counterterrorism veterans believe the review stems from Trump making a last-minute effort to punish the CIA for various offenses, but mostly because the agency concluded that Russia interfered in the 2016 election to help him become president. A retired senior intelligence official told The Intercept that a senior congressional aide on an intelligence committee asked the White House last week to explain Miller’s letter to the CIA. The retired official said the aide was told, “It’s because the president’s followers believe the agency played a role” in Trump’s election loss last month. The retired official said the White House acknowledged that the claim of CIA involvement in Trump’s election loss was unfounded, but the facts didn’t matter. The message from the White House, according to the retired official, was that “it matters what Trump’s supporters think, and they think that’s the case.”

Given trump’s pettiness and thin-skinned demeanor, it may very well be that Trump ordered the Pentagon to take its toys away from the CIA, but it also doesn’t matter.

The senior Pentagon official involved in the review insisted that the review be completed and signed off by acting secretary Miller by January 5, 2021, the day before Congress will most likely certify the Electoral College victory for Joe Biden. A Pentagon spokesperson disputed that the memo would be finished by then.

Why do the review now, weeks before a new president takes office?

“Because nobody wants to do this,” the senior Pentagon official said. “It’s like ripping off a Band-Aid.”

While it is unusual to order a review so close to a new administration’s term, it is also ineffective. The senior Pentagon official refused to explain why January 5 was chosen as the date for completing the review. While it appears to be related to Congress’s certification of the Electoral College, several national security officials insist that the Pentagon cannot implement any changes reflected in the new memo before or shortly after President-elect Joe Biden’s inauguration. So the review’s conclusions cannot be foisted on the incoming administration.

But it does provide Biden with an unintentional gift. By forcing the incoming administration to respond to the review shortly after taking power, Trump’s team provides Biden with an opportunity to quickly take stock of 20 years of lethal operations, both in direct view and secret — and make a decision to end an unwinnable war.

Somewhat predictably, the part of the national security state that sees a threat to its future missions or budget is portraying dire consequences. “It’s the head of the snake, going ‘Turn!’” a former senior military officer told The Intercept. “The tail never likes it.”

A lame-duck president agitating for a useful bureaucratic change as a parting shot at the deep state is the same delusional logic that came with much of Trump’s four years: occasionally doing the right thing for all the wrong reasons.