Who wants booty and brains?

Dark side of the moon

11 Things Not to Do When You’re Kissing

We need a strong connection

Russia and the Ukraine crisis

Sri Lanka: Monday’s Power Outage Could Be An Act Of Sabotage

Who Is better going down on busines?

Who wants booty and brains?

Booty and Brains : Why You Should Have More Junk in Your Trunk

(80- 11/12).   Now it seems there’s even more to love about having a replete rump. A study conducted by Oxford University’s Churchill Hospital and published in the International Journal of Obesity reveals that women with ample derriere’s are smarter and healthier.

You read that right: having more junk in your trunk has been linked to having a higher IQ and better health.

Over the course of the study, researchers found that participants with larger behinds tended to have a relatively higher storage of Omega 3 fats as well as advantageous leptin levels.

You may have heard of leptin: it’s a hormone that regulates appetite. Specifically, it’s the hormone that suppresses appetite. A lack of favourable amounts of leptin can result in increased hunger, and as a result, over-eating.

And those Omega 3 fats?

Want another reason to love your pear-shaped self?

This same study shows that children born to women with wider hips and more plentiful rumps tend to be smarter.

These children will have had to have been breastfed. Breast milk’s fat content is sourced from the hips, thighs and buttocks, and since this is where the highest levels of those Omega 3’s are stored, babies nursed by more pear-shaped mothers get more of this brain-boosting nutrient.

Just like the fats we find in the foods we eat, not all fats in and on our bodies are bad. While it’s been conclusively proven that carrying extra weight around our mid-sections is mentally and physically detrimental, having been linked to anxiety, depression and an increased risk of heart disease, diabetes and cancer, the weight we store around our bottoms tends to be more protective in nature.

The study shows that, “it is the protective role of lower body [fat], that is, gluteofemoral fat that is striking. The protective properties of the lower-body fat depot have been confirmed in many studies conducted in subjects with a wide range of age, BMI and co-morbidities.” 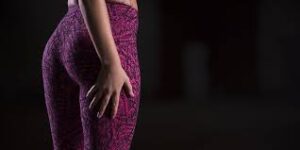 Like we said, there’s a lot to love about a bigger butt, so next time you’re cursing your inability to find a two-piece that fits your upper and lower body measurements, remember: a little inconvenience is a comparatively small price to pay for everything your beautiful booty bestows.

Dark side of the moon

As far as we know, darkness has been inextricably linked with malevolence and condemnation. What is the...

11 Things Not to Do When You’re Kissing