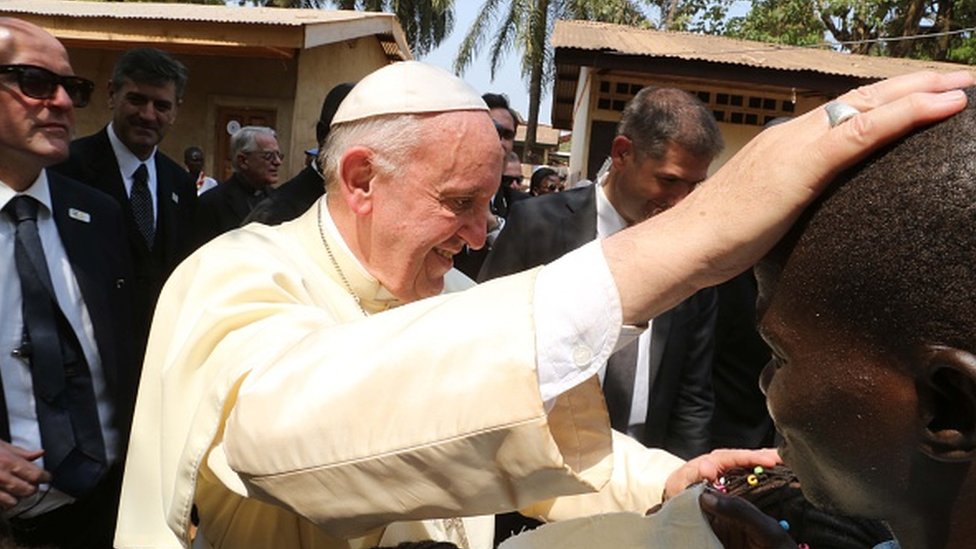 We publish an excerpt of Pope Francis’ interview published online on Friday by Comboni missionaries in Spain in ‘Mundo Negro’ magazine. The 30-minute interview took place on 15 December at the Vatican with the magazine’s director, Fr. Jaume Calvera, Editor-in-Chief ,Fr.Javier Fariñas Martín, and Cardinal Miguel Ángel Ayuso Guixot, Prefect of the Dicastery for Interreligious Dialogue.

Q: Holy Father, you became a Jesuit, among other reasons, to go to Japan as a missionary…

Yes, that is true.

Q: What has stayed with you since that time?

I think I have always been interested in the peripheries. I look at the peripheries from the inside, not only because they interest me intellectually. And that is what stays with me, to go beyond the frontiers.

Q: You have said that “Africa never ceases to surprise.” How much of this surprise do you think can be attributed to the missionaries you have met?

What surprises me most about missionaries is their ability to put themselves on the ground, respect cultures and contribute to their development. They do not uproot the people, on the contrary. When I see missionaries, and there are always some who do not succeed, I note that Catholic missionary outreach does not proselytise, but proclaims the Gospel according to the culture of each place. This is Catholicism, respect for cultures. There is no Catholic culture as such; yes, there is Catholic thought, but every culture is rooted in what is Catholic, and this is already experienced in the very action of the Holy Spirit on the morning of Pentecost. This is very clear. Catholicism is not uniformity, it is harmony, a harmony of differences. And this harmony is created by the Holy Spirit. A missionary goes forth, respects what is found in each place, and helps to create harmony, but (he or she) does not proselytise ideologically or religiously, much less with a colonialistic mindset. Some aberrations have occurred on other continents, for example the serious problem of the schools in Canada that I visited and spoke about. Missionary work must respect the culture of the people, living within that context and doing this service.

Q: The Second Vatican Council sixty years ago offered extraordinary missionary momentum. Has the understanding of mission changed much since then?

Thank God, yes. Historians say that it takes 100 years for a Council to be fully implemented, so it is only half way through. Many things have changed in the Church, many things for the better … There are two interesting signs: the initial imprudent enthusiasm of the Council has already disappeared, I am thinking of the liturgical effervescence, which is almost non-existent. And anti-conciliar resistance is emerging that had never been seen before, something that is typical of any process of maturation. But so much has changed… On the missionary side, respect for cultures and inculturation of the Gospel are values that blossomed as an indirect consequence of the Council. Faith is inculturated and the Gospel takes on the culture of its people, allowing for an evangelization of culture.

Q: Is mission outreach necessarily one of dialogue?

Of course it is. Today there is much more awareness of dialogue, and those who do not know how to dialogue do not mature, grow and will not be able to leave any impact on society. Dialogue is fundamental.

Q: Are we still very focused on the number of Catholics?

Statistics are useful, but we should not put our hopes in them. I ask myself: in whom do I place my hope? And I ask everyone: in whom do you place your hope, in your organization, in your sociological ability to bring people together, or in the power of the Gospel?

Q: From 31 January to 5 February you will travel to the Democratic Republic of Congo and South Sudan …

In July (the journey) had to be suspended because of my knee problem … In South Sudan I will go together, on the same (official) level, with the Archbishop of Canterbury and the Moderator of the Church of Scotland, and we are working very well together. The Democratic Republic of Congo … it’s like a fortress, a bastion of inspiration. You only have to look here in Rome at the Congolese community, which is led by a nun, Sister Rita, a woman who teaches at the university, but who commands as if she were a bishop … I have celebrated Mass here in the Congolese rite and it is a community that is very close to me. I have been looking forward to this trip, wishing it to be as soon as possible. South Sudan is a suffering community. (Even) Congo is suffering at this time due to armed conflict, that is why I am not going to Goma, since it is not possible due to the fighting. It’s not that I’m not going because I’m afraid, but with this  (volatile) atmosphere and seeing what is happening…we have to take care of people.

Q: You mentioning human and existential peripheries brings to mind the African continent. Are these two peripheries inseparable?

Africa is unique… (but) there is something we must denounce: there is a collective unconscious idea…that says Africa is to be exploited. History tells us this, with independence halfway: they give them economic independence from the ground up, but they keep the subsoil to exploit, we see the exploitation of other countries taking their resources.

Q: What are the riches of the continent that we do not see?

We only see material wealth, which is why historically it has only been sought and exploited. Today we see that many world powers are going there for plunder, it is true, and they do not see the intelligence, the greatness, the art of the people.

Q: While insisting on the war in Ukraine, you reiterate that we must not forget other conflicts that remain hidden, some of them in Africa …

This is obvious. I said that we now realize that this is a world war because it is right next door … One of the biggest problems is the production of weapons. Someone once told me that if we stopped producing weapons for a year, world hunger would end. An industry that kills…

Q: When we talk about the exploitation of the African continent, we are talking about natural resources and people. What are we missing when we build fences and put up obstacles to stop or impede their arrival?

And when we put up barbed wires to prevent them from escaping … It is a crime. It is a crime. And those countries that have a demographic index at its lowest, that need people, that have empty cities and don’t know how to manage the integration of migrants. Migrants must be welcomed, accompanied, promoted and integrated. If they are not integrated, that is bad … But there’s a great European injustice, isn’t there? Greece, Cyprus, Italy, Spain, and even Malta are the countries that are receiving most migrants. And what is happening in Italy where despite the current government’s migration policy being, let’s say in a nice way, restrictive, the country has always opened its doors to save the people that Europe does not welcome. These countries have to deal with everything and are faced with the dilemma of whether to send them back where they risk being killed or dying, or to do what they can… This is a serious problem. The European Union does not accompany them.

As China Reopens, African Countries Gear Up for Business
Qin Gang: Africa Should Not Be an Arena for Competition between World Powers