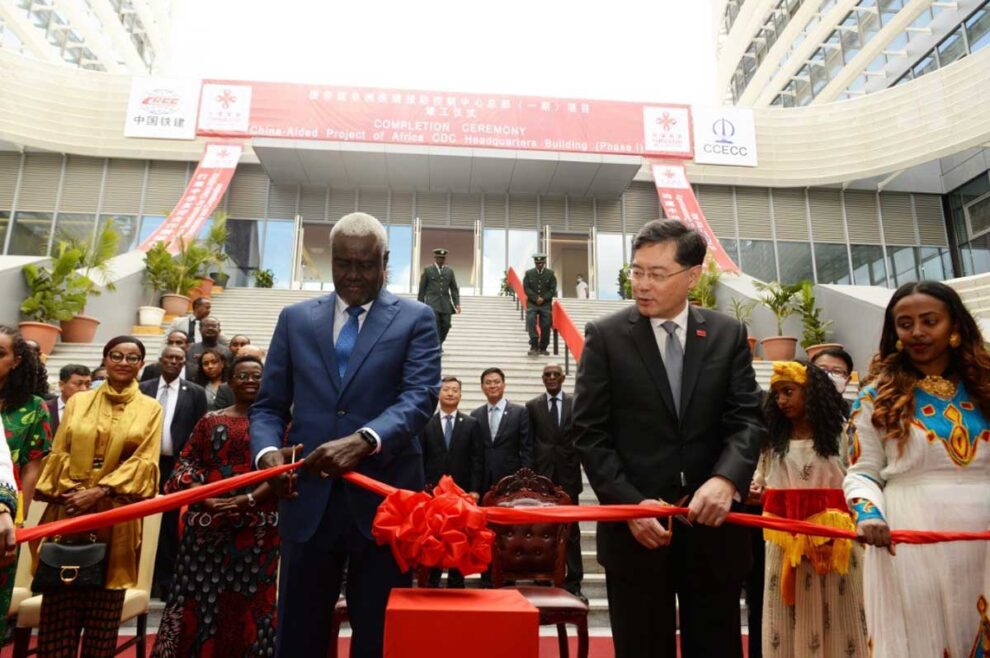 After his appointment as the new Chinese Foreign Minister, Qin Gang, chose to pay a working visit to Africa. Without mincing words, this choice has multiple geopolitical implications and significance for further strengthening relations between China and Africa.

In fact details are not needed here, but readers could guess and imagine what these mean to both China and Africa. At a glance, Minister Qin Gang was in Addis Ababa, the East African city and the capital of Ethiopia, the headquarters of the continental organization popularly referred to as African Union.

According various reports, the Chinese Foreign Minister held discussions with African Union Commission Chairperson Moussa Faki Mahamat. The bilateral talks are related to various strategic development issues in which China largely plays appreciable roles for the benefit of Africa and its people.

There is no need listing all the development questions here, but one important point is that Qin Gang’s visit was principally connected to ribbon cutting ceremony marking the completion of the newly constructed building – the African Centre for Disease Control and Prevention (Africa CDC) headquarters in Addis Ababa.

The building is one of the best-equipped centres for disease control in Africa, allowing Africa CDC to play its role as the technical institution coordinating disease prevention, surveillance and control in the continent in partnership with the national public health institutes and ministries of health in African countries.

Located in the African Village, south of Addis Ababa, the new site covers an area of 90,000 m2 with a total construction area of nearly 40,000 m2. It includes an emergency operation centre, a data centre, laboratory, resource centre, briefing rooms, training centre, conference centre, offices, and expatriate apartments, – all constructed, furnished and equipped by the Government of China.

Ethiopia is part of a week-long tour of the continent, and was joined by Moussa Faki Mahamat, at the opening of the $80 million headquarters, which also built and equipped by China. Worth noting here that it financed this complex’s construction, as it previously did for the headquarters of the AU itself, also based in the Ethiopian capital.

According to Gang the project was a testament to the growing relations between his country and Africa – is seen as the latest example of China’s increasing investment on the continent. Beijing accelerated its involvement to tackle health crises after the Ebola outbreak in West Africa in 2014. Four years later, it announced its plan to build the Africa CDC headquarters. The agency led the continent’s response to the Covid-19 pandemic.

During his talks, he also emphasized China’s partnership with Africa in security and economic development. Gang rejected the idea that China is competing in Africa with the United States, which last month sought to reassert its influence with a U.S.-Africa summit in Washington.

Instead, he underlined that what Africa needs is solidarity and cooperation, not block competition. China has invested heavily in infrastructure in African countries, including roads, railways and hospitals.

In his contribution, AUC Chairman Moussa Faki Mahamat told a joint press conference that Africa’s lack of permanent representation on the Security Council is a “burning issue” considering that most issues on the council agenda are related to African countries. China is one of the council’s five permanent members.

“It is unacceptable that others decide in the place of others. It is not fair. We need a new order at the international level which will respect the interests of others,” he said.

Moussa Mahamat underlined the fact that “Africa refuses to be considered to be an arena of exchange of influence. …We are open to cooperation and partnership with everybody, but our principles, our priorities and our interests have to be respected. The partnership we have with China is based on these principles.”

While in Addis Ababa, Gang also met with Ethiopian Prime Minister Abiy Ahmed and other government officials, and announced a partial cancellation of Ethiopia’s debt to China during the visit, though neither side provided details. Ethiopia has borrowed $13.7 billion from China since 2000 and has been seeking to restructure its debt to foreign lenders since 2021.

Qin Gang now 56, who was appointed in December, is on his first overseas visit as foreign minister and started a week-long trip to Africa. The new foreign minister is following in the footsteps of his predecessors, who have for more than three decades started each year with a trip to Africa. It shows that China attaches great importance to the traditional friendship with Africa and the development of China-Africa relations.

Pope Francis: Africa ‘a continent to be valued, not plundered’
Solid base to boost cooperation with Africa