After two days in a small Somali hospital, Abdiwali Abdi seemed to be groping his way towards some sort of recovery.

The two-year-old still weighed just 4.6kg (10lb 2oz) – not much more than a healthy newborn. But he had the energy to moan now, and his mother, Hawa, sat beside him on the bed, in the border town of Dollow, breastfeeding her two-month-old daughter and making hopeful plans to return to their makeshift camp on the dusty outskirts. 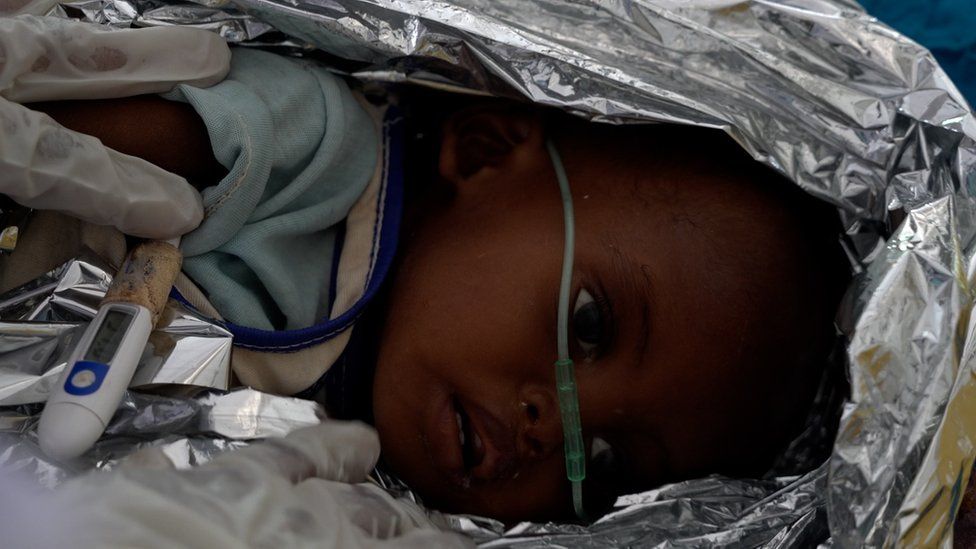 “It’s encouraging,” said Fatuma Mohammed, a senior nurse and administrator from Kenya, as she paced around the 17-bed stabilisation ward, with its 17 infants all wrestling with malnutrition, and with the various diseases that keep it company here on the dry, thorny plains of southern Somalia, as the country grapples with its worst drought in 40 years.

“We don’t have food to feed him, but our neighbours have been helping us,” said Hawa, 22, watching her son closely. He’d been growing weaker for weeks, with a fever and diarrhoea, before they finally came to seek help.

The district hospital in Dollow – a dusty little border town in south-western Somalia – has been quietly assisting children like Abdiwali for years. Funded by the UK government, and others, it has built up a network of community workers who provide basic medical support, not just in town, but deep into the contested countryside, where the militant Islamist group al-Shabab controls many villages.

But today, following a fifth failed rainy season, Dollow is being overwhelmed by a surge of new arrivals. Tens of thousands of families like Abdiwali’s – their cattle dead and their farms parched – have gathered in crowded informal settlements, hoping to find food and safety.

“We’re talking about hundreds of thousands of lives [at stake] and people are dying now. We don’t have enough resources to support them,” said Abdulkadir Mohamed, from the Norwegian Refugee Council, watching more families arrive at one of the larger camps.

At the hospital, nearly 100 women sat in the midday heat, nursing malnourished infants, waiting for them to be weighed and assessed.

The United Nations is warning that 6.7 million people will need food aid in Somalia in the coming months – about 40% of the population.

Overnight, Abdiwali’s condition deteriorated. Soon after nine the next morning, his temperature fell sharply, and two Somali doctors quickly wrapped him in a thermal blanket made of foil. Two beds away, an 18-month-old girl was getting the same, urgent treatment.

“We’re really worried. These children cannot control their temperatures very well. That’s why we never put on the [ceiling] fans in the stabilisation centres. If the child warms up, then the survival rate is higher,” said Ms Mohammed, as a doctor rested a thermometer under Abdiwali’s limp arm.

By now, the boy’s father, Kerad Adan, 28, had arrived at the hospital, and was pacing nervously around the bed.

Before this new drought, the family had been quite well off, with four children, 40 cows and a thatched home near the town of Qansax Dheere, 200km (125 miles) south of Dollow.

But that region, Bay, lies at the centre of the current drought, and, two months ago, the last of the family’s cattle – the source of all their wealth – died. Soon after that, the parents decided to pack up a few belongings on a donkey cart and head north with the family, trekking for six days. Al-Shabab militants tried to stop them leaving the town but settled for confiscating Mr Adan’s mobile phone, smashing it in front of him. 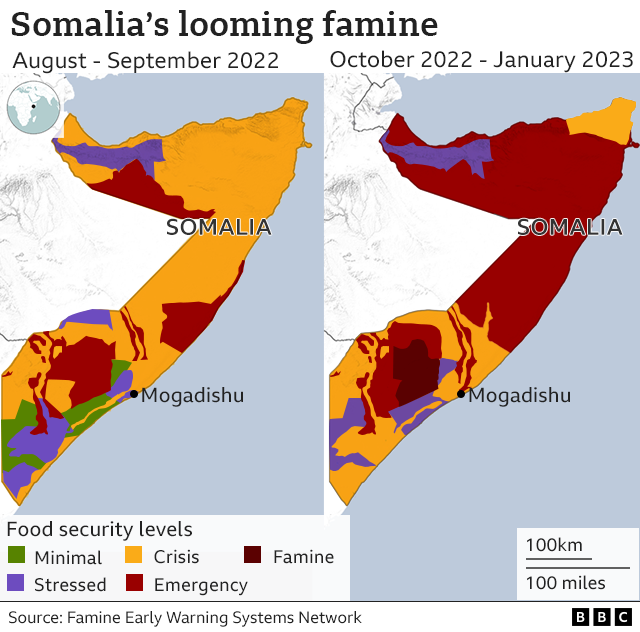 Suddenly the doctors clustered around Abdiwali. One of them used two fingers to press, repeatedly, on his chest, hoping to stimulate a heartbeat. His colleague moved closer to look into the child’s unmoving eyes. The parents stood quietly at the foot of the bed.

“The heartbeats have gone,” whispered Ms Mohammed, now watching Abdiwali’s mother as she slumped onto the bed and began to cry.

“We’ve been able to rescue quite a lot of babies. But probably things are getting worse now,” said Ms Mohammed, in the manner of someone who has seen such scenes many times.

“It’s so sad and painful when you witness something that can be prevented and can be corrected very easily,” said the hospital’s head doctor, Ali Shueb.

Within minutes, Abdiwali’s father was on the phone, alerting relatives, and planning a funeral, that afternoon.

“Everyone must die, at some time,” he said, quietly, as if to himself. 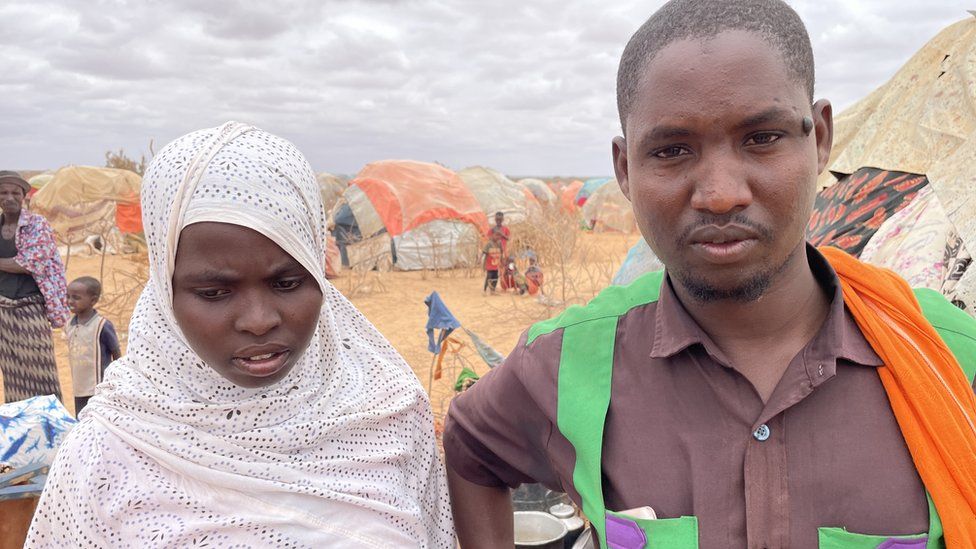 An ambulance reversed up the narrow lane outside the hospital, and Abdiwali’s parents climbed onboard, the father carefully clutching his son’s body, wrapped in a heavy piece of material, in both hands.

Later, Pamela Wasonga showed visitors the hospital’s well-stocked pharmacy and small laboratory. She first came to Somalia from her home in Kenya during its last famine, in 2011, and has been here ever since, confident that much has changed since then, and that the steady work of the past decade was paying off.

“I think the continuity of service that has been here all along has probably averted a very, very much worse situation. There are more [international] organisations now on the ground, and more local organisations who are able to reach remote and hard to reach areas,” she said.

And yet, just as another famine looms, the hospital has – perhaps temporarily – lost half its international funding as a result of delays caused by political upheavals in the capital, Mogadishu.

Worse still is growing evidence that a distracted world has been slow to recognise the scale of the catastrophe now unfolding in Somalia, with new data showing less than half the humanitarian funding required to respond to the drought is currently in place.

The UK, for instance, provided over £200 million ($223 million) in humanitarian assistance during Somalia’s last serious drought in 2017. This year it is spending less than a quarter of that.

“We ask the world… not to lose focus on Somalia. Somalia needs help now. If we don’t get it, we are heading for a catastrophe, for sure,” said Ms Wasonga. 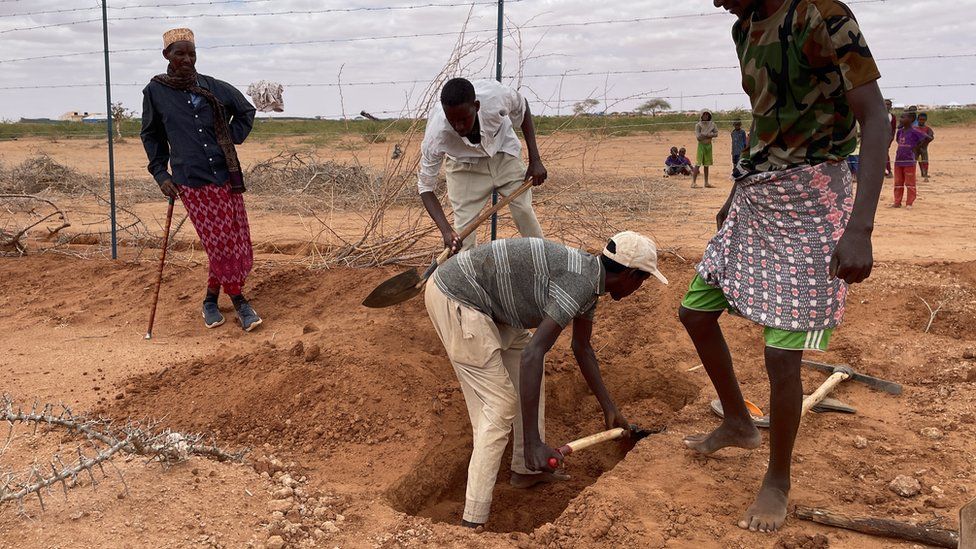 By the time the ambulance reached the far edge of Ladan camp, on the eastern outskirts of town, a crowd had gathered outside the family’s tent.

Flurries of wind whipped up spirals of thick dust. Jerry cans of water were brought in to wash the child’s body. Someone had already bought a special piece of white linen for the burial. Then two neighbours, shovels slung over bony shoulders, set off towards a fenced-off scrap of wasteland to dig a grave. They chose a spot between two other small, child-sized piles of earth.

An hour later, Hawa arrived at the cemetery. By tradition, women do not attend burials. But she and her mother had made it clear they would not be kept away, and so they sat, with a few other women, perhaps 20 metres from the graveside.

“You tried your best.” “You have other children.” The women quietly passed around words of sympathy and encouragement, while Abdiwali’s father took turns with the other men, swinging a pickaxe into the hard, dry earth.

A short prayer followed, then the burial itself. Then Abdiwali’s parents walked back towards their new home, as the wind blew in across the plain, and scraps of rags and litter shook on a thousand, bone-dry, thorn bushes.