The effects of the different outcomes reached in peace processes in the Global South are worthy of consideration. Citizens in those countries that have experienced democratic transitions can recognise the transformative power of the compromises achieved in peace negotiations. 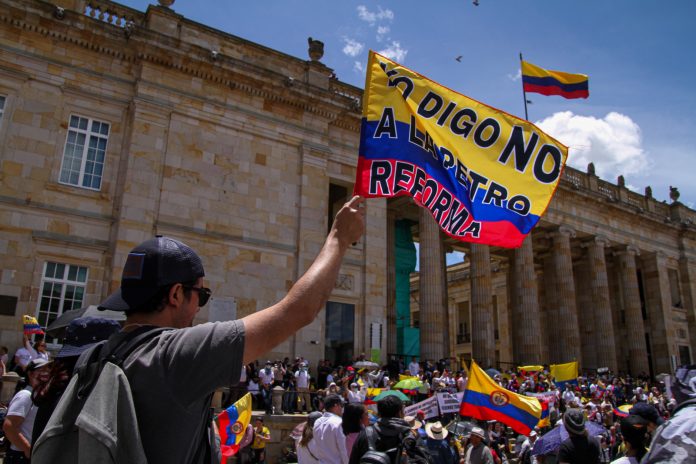 These compromises are often materialised through the recognition of democratic rules expressed in respect of human rights, the need to abide by the deliberations of the rule of law and the possibility of celebrating free and fair elections to facilitate political change – among other principles that are the cornerstones of democratic regimes. The political transitions of South Africa and Colombia expose some lessons and challenges regarding social cohesion and reconciliation which should be explored.

Although South Africa and Colombia are on different continents, they have some general similarities and social challenges that make their comparison appropriate. In geographic terms, they are similar in size (with South Africa at 1.2-million, and Colombia at 1.1-million square kilometres) and include a diverse range of natural ecosystems. The demography of the countries is also similar – Colombia reached more than 50-million habitants in 2020, while South Africa had more than 59.31-million habitants in 2020. According to data from the World Bank, the countries also have similar GDP scores, with South Africa’s 2018 Gross Domestic Product in current US dollars amounting to 12 166, and Colombia’s to 13 545. Moreover, the citizens of both countries passionately enjoy sports: South Africans love rugby and cricket and Colombians enjoy soccer and cycling.

One could also find similarities in the way both countries struggle to manage social challenges. For example, the lack of support in recognising multiculturality as a fundamental pillar that builds a nation.

Although the 1991 Colombian Constitution recognises the collective rights of indigenous peoples and Afro-descendant communities over local territories, there are still many challenges linked to state weakness and inefficient institutional support, as reflected in the lack of provision of public services to these territories.

The case of South Africa is similar – although the Constitution reached in 1994 provides some mandates to ensure that all communities enjoy cultural security and can work together as members of a single nation, various challenges affect a comprehensive integration of the ethnic and cultural diversity of the country into a shared collective project of nation building.

One could argue that South African and Colombian citizens are facing similar challenges in recognising the relevance of diversity in society, which also reflects in economic and political terms. Let’s take a look at these elements in turn.

On the economic side, citizens of both countries recognise inequality and corruption as major challenges to a vibrant and stable economy. According to the World Bank, although Colombia is the second most unequal country in Latin America, South Africa is the most unequal worldwide. It is not surprising, then, that citizens in both countries perceive that the scourge of corruption is worsening over time. Wealth distribution, the effect of corruption and how the interaction of these elements affects the provision of public goods that would guarantee a better sustainable and equal development for both nations, are of common concern.

On the political side, both countries have experienced various events linked to political violence and social uprising which reflect the complex and profound differences that sustained internal armed conflicts have over time.

On the one hand, the origin of South Africa’s conflict is linked to social inequality, state-centered injustices expressed under apartheid rule, and the use of protests by citizens as a way to demonstrate their disagreement with the ruling government.

Conversely, in Colombia, research suggests the origin of the armed conflict reflects the effect of state weakness, the strong influence of radical left parties and the ease in accessing weapons and military training in rural areas for the civilian population which creates opportunities for rebellions reflected in armed violence.

These elements can be measured through the rate of internal homicide, which is similar for both countries. According to the World Bank, South Africa had a rate of 33 per 100 000 citizens, and Colombia had a rate of 23 per 100 000 citizens for 2020. However, if one checks the same data in the decade of the 1990s, one can see that, after the peace negotiations, there is a reduction in this trend. In other words, the effect of the outcome of peace negotiations held in both countries contributed to the de-escalation of the armed conflict.

The main outcome of both sets of peace negotiations was the adoption of a new Constitution which guaranteed the development of activities to allow former rebels to participate in politics based on democratic rules. Thus, a process of democratic consolidation started to become a reality in both countries. South Africa continued its historical legacy of being a parliamentary democracy in which one citizen could exert their right to vote, extending the right no matter the colour of a person’s skin and allowing the ANC to become the ruling party. Conversely, Colombia started to embrace the political difference with the participation of the leftist Democratic Alliance M-19 in the national constituency assembly and other local and national elections.

Thus, the social transformation reflected in the South African political transition has served as a valuable lesson to Colombia to include provisions in the peace negotiations with rebel groups in its contemporary history. The South African example has helped Colombian people to understand the relevance of actions that generate social cohesion and reconciliation. In this regard, the South African peace negotiators and former judges that led the political transition assisted both warring parties in the Colombian peace negotiations with the FARC rebels. The establishment of peacebuilding activities, namely the adoption of a transitional justice tribunal, the guarantee of former rebels to be part of the society, the relevance of reparations to the victims of the armed conflict and the establishment of a Truth Commission, has served to understand the cruelty of the longest-armed conflict in the Western Hemisphere, reflected in Colombia.

South Africa is an example to Colombia on the need to promote reconciliation, emphasising the importance of creating and developing institutions that promote forgiveness as a way of turning the page of violence.

However, there are challenges in both peacebuilding processes that have set back the possibility of true social cohesion and reintegration. Here, it is relevant to recall that the peacebuilding processes are the development of constructive personal, group and political relationships across ethnic, religious, class, national and racial boundaries. Among these challenges are the use of populist rhetoric, fuelled by polarising political material that spreads quickly on social media, the lack of support to develop local empowerment activities to build new societies from the bottom-up, and the absence of a shared vision to address structural issues that lead to violent conflict.

Addressing the populist rhetoric that undermines the peacebuilding process through social media interactions is not an easy task. Although the peacebuilding process in South Africa started officially in 1994 and Colombia’s started in 1991, the massive adoption of new information and communication technologies by citizens in recent decades has changed the interaction between the rulers and the ruled. Opponents of the peacebuilding processes in both countries are able to stretch the fundamental right to freedom of expression to polarise citizens on social media in an effort to win political advantages reflected in electoral terms. Both countries thus count on applicable legislation and institutions to guarantee respect for human rights in cyberspace.

The need to prioritise and materialise peacebuilding activities after a bottom-up approach in both countries is best embodied in the South African phrase “local is lekker”. Although one could argue that, in both countries, there was a consensus between elites to end the armed conflict reflected in a political transition, the need to think about implementing those initiatives at the local level became imperative.

The challenge continues in attempting to integrate those local activities at the national level, specifically relating to the shared vision to address the structural issues that led to violent conflict – such as inequality and social grievances. Although there is undoubtedly much work to be done to implement social cohesion and reconciliation at the local and national level, both countries could improve their local peacebuilding processes by addressing these challenges comprehensively.

The peace process experienced by different communities in the Global South varies not only in the nature of the armed conflict, but also in the transformative action of the outcomes achieved in the peace accords. The South African and Colombian experiences offer valuable insight into the limitations of peace accords – social cohesion and reconciliation are not signed into practice and need to be encouraged at every level of government in order to be realised.