In the wrestling ring of South African politics, get set for a battle royal before 2024

In the wrestling ring of South African politics, get set for a battle royal before 2024

Power has changed hands in a quarter of the metros since the 31 October local elections. Now, South Africans are heading for an even wilder ride than between 2016 and 2021. Here we look at the easiest paths to growth for political parties, and how things might play out in the agonising race to the 2024 national elections.

South African politics and professional wrestling have a lot in common. Pantomime, theatrics, sadly even some scripted violence. In professional wrestling you have an event called a battle royal, where all the competitors start the fight in the ring at the same time. The objective is to eliminate every opponent and be the last person left in the ring. Imagine the ANC as a competitor, the undisputed champion since 1994 who has never been defeated, but showing vulnerability and chinks in its formidable armour. However, instead of seizing the opportunity to eliminate the ANC, its opponents are fighting among themselves, allowing the wounded but still mighty ruling party enough time to recover while the rest smash the living daylights out of each other.

We’ve been seeing a lot of this in our politics lately. COPE’s Colleen Makhubele and the ANC had some wrath directed at them, but the DA went nuclear on ActionSA, with the latter aiming its nuclear warheads at DA headquarters – they’re still going at it.

The Political Party Funding Act allows us to see who is donating significant sums to the various parties, and the DA and ActionSA often have the same donors. Their ideological outlook and policies are closer to each other than those of the ANC, but their disdain for each other supersedes that common ground.

We are well on the road to the 2024 elections. Yes, there are critical by-elections in the coming weeks and months, but parties are dialled into 2024 – reflecting on where they picked up or lost votes in 2021 and thinking about how they can grow and grab low-hanging fruit before 2024.

The lowest-hanging fruit for parties like the DA, ActionSA and Freedom Front Plus (FF+) are not voters in the townships, informal settlements or rural areas, but in the suburbs of metros and secondary cities. It will take fewer resources to get a suburban than a rural voter. The DA believes it will take less effort to get an ActionSA or FF+ voter back to the blue team than to get a long-standing ANC voter to give up on the governing party and move their vote to the DA.

ActionSA had an impressive debut in the 2021 local government elections. They only contested six municipalities and focused on the metros of Gauteng and select parts of KwaZulu-Natal. The risk paid off. ActionSA has contested three by-elections since the November elections. Its best result was in a suburban Tshwane ward where it pipped the FF+ to second place. It obtained a similar percentage in a Soweto by-election, but its growth and position on the podium was better in Tshwane. It also contested a by-election in Kwanobuhle in Kariega, Nelson Mandela Bay, and finished third there as well. The sample size is small, but the evidence from these by-elections suggests that ActionSA is more likely to grow at the expense of parties like the DA in suburban wards than the ANC in urban townships.

The FF+ learnt from its mistake in 2009 when then leader Pieter Mulder served as deputy minister of agriculture. The DA exploited this decision and the FF+ continued to lose ground to the blue team until a DA leader coordinated a march against a teacher in Schweizer-Reneke, North West. The FF+ returned the favour and focused its ire on the DA, accusing the party of no longer representing the voters who supported them.

The EFF has a chance to form stable coalitions with the ANC in metros such as Ekurhuleni and medium-sized municipalities such as Mogale City (Krugersdorp) and Metsimaholo (Sasolburg), and in turn receive key mayoral committee positions, enabling it to make a difference to residents. The flip side is that it will be seen as a junior coalition partner beholden to the ANC. The EFF has won three by-elections against the ANC in three different provinces in 2022. Its most logical path to growth is through a flailing ANC. If it is seen as propping up a vulnerable ANC, the path to growth could have fewer options. 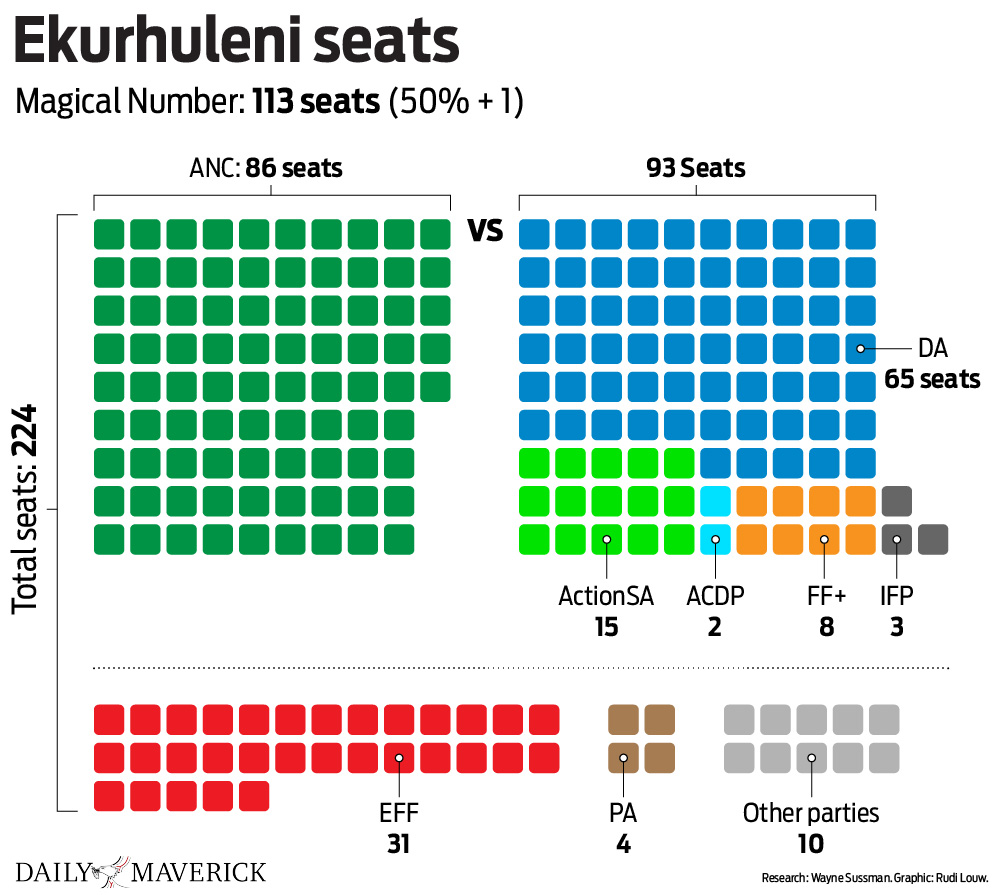 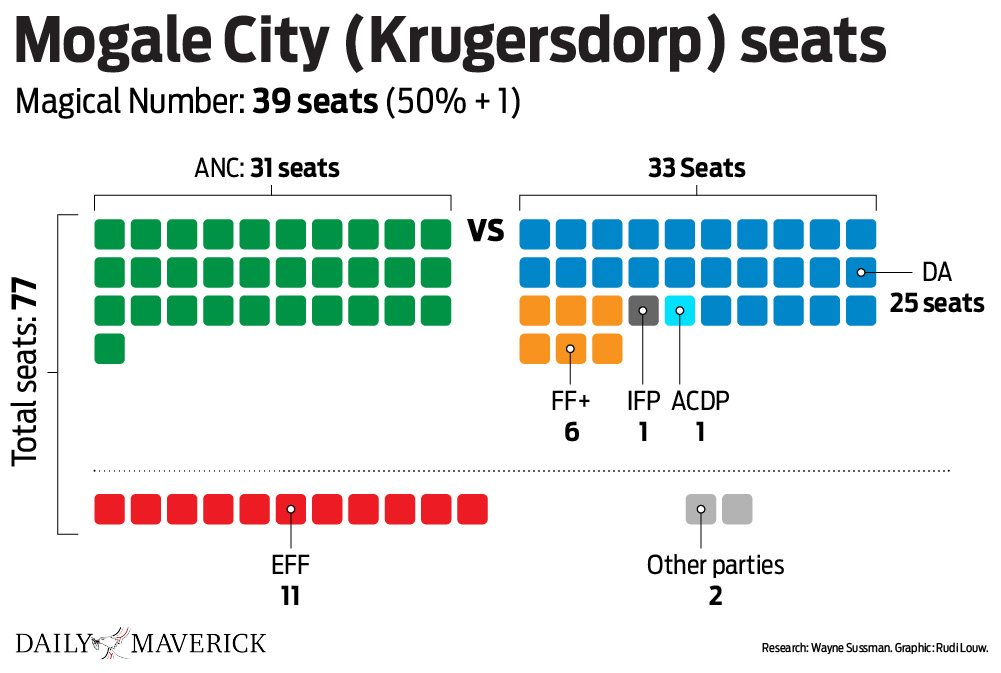 The Patriotic Alliance (PA) was another party that made its mark on the 2021 elections. It consolidated its by-election wins with landslide victories in many coloured communities in the south of Johannesburg, and emerged as kingmaker in a handful of municipalities in the rural Western Cape and Northern Cape. ActionSA did not contest those provinces and while it did contest in Johannesburg, its best results were not in these traditionally coloured areas.

The animus between these parties after the collapse of the Johannesburg coalition was not just about opposition dreams in Joburg being crushed, but also about winning the narrative on the campaign against undocumented foreigners. Both have been vocal on this, and the fact that they are no longer in a coalition in Johannesburg and Ekurhuleni puts some distance between them, so they can sharpen their attacks on each other for softening their position on the issue.

From Eldorado Park to Elsies Rivier

Gayton McKenzie helped the DA prop up its coalition in Johannesburg and Knysna. The PA was also instrumental in bringing down those two DA-led governments and relegating the party to the opposition benches. Even though the PA finished behind the ANC, the EFF, GOOD and the FF+ in the Western Cape in the November elections, the DA would be most threatened by the fifth-place finisher. McKenzie has been establishing himself as mayor of the Central Karoo District and his brand and style of campaigning have the potential to cause the DA far more worries than its more established Western Cape rivals. They will go after each other’s voters in the coming months, since it will be simpler than trying to win over the ANC’s. 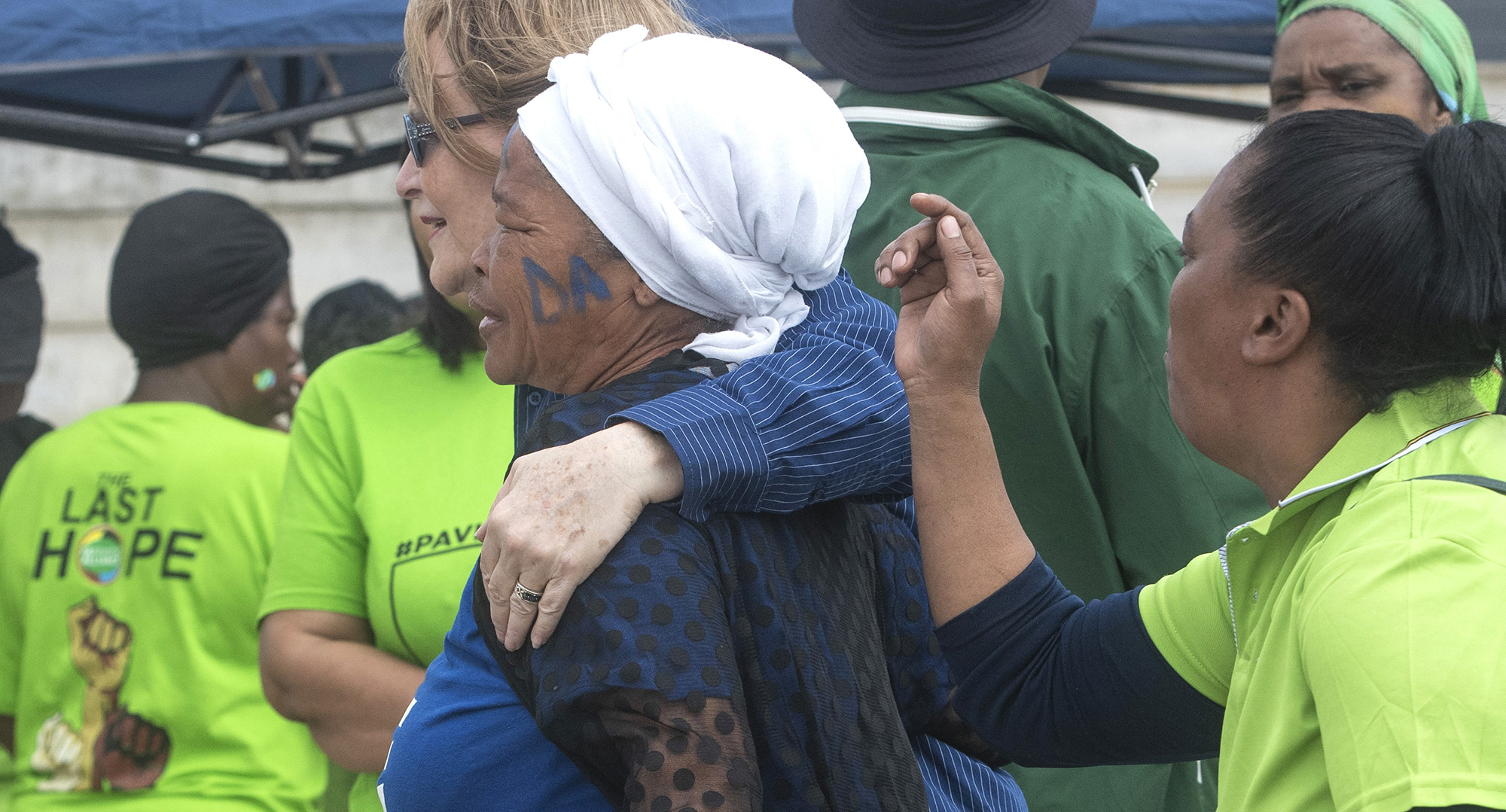 The stakes have never been higher, yet the strategy and orientation of opposition parties will remain fixed in the short-term. There is no luxury of a medium-term outlook for many opposition parties. The coalition scenario does not fit neatly with the wrestling metaphor, but by the time we get to the next national election, it might just be a wounded ANC, alone in the ring, with its hand held aloft again, or an out-of-breath yet broadly smiling ANC in the ring with a smaller, little-known competitor who helps it to victory. While, on the outside, attired in spandex gear, Helen Zille, Herman Mashaba, Pieter Groenewald and Gayton McKenzie will be going at each other, oblivious to what just happened in the ring.