The Nigerian army has repelled an attack on a military base in western Nigeria where nearly 1,700 jihadists are being held, killing eight suspected insurgents affiliated with the Islamic State group, two military sources said Monday.

Dozens of Islamic State in West Africa (Iswap) fighters tried to break into the Wawa military base in Niger state near the border with Benin on Saturday to free hundreds of jihadists, the two officers told AFP on condition of anonymity. 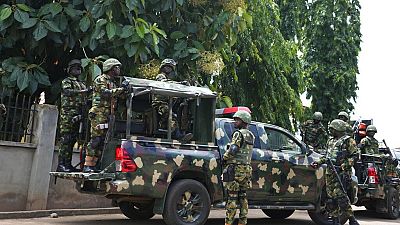 The attack is a reminder of Iswap’s ability to strike hundreds of kilometres from its northeastern stronghold, where the army is fighting a 13-year-old jihadist insurgency.

“The terrorists attacked the base around midnight in large numbers but were pulverised by air support, leading to the death of eight of them,” said one of the officers.

Three attackers, including their commander, were captured in the attack, he added.

The soldiers had been alerted by intelligence and were waiting for the insurgents to attack the base, said a second officer who gave the same account.

The heavily armed jihadists tried to blow up the base gates but met “stiff resistance” from the soldiers, he said.

“It was obvious that they wanted to free other terrorists held in the base as they did in Kuje prison,” he added.

Between 2017 and 2018, the Wawa base had been used as a court to try hundreds of Boko Haram and Iswap jihadists.

On Friday, the Nigerian police tightened security especially in the capital after the US and UK warned of an “increased risk of terrorist attack” in Abuja.

Washington did not give further details but ordered the families of its diplomatic staff to leave Abuja.

Iswap has increasingly claimed responsibility for attacks far from the northeast, including in Kogi and Niger states, both of which border the Federal Capital Territory (FCT), where Abuja is located.

The jihadist insurgency in the northeast has killed nearly 40,000 people and displaced two million.