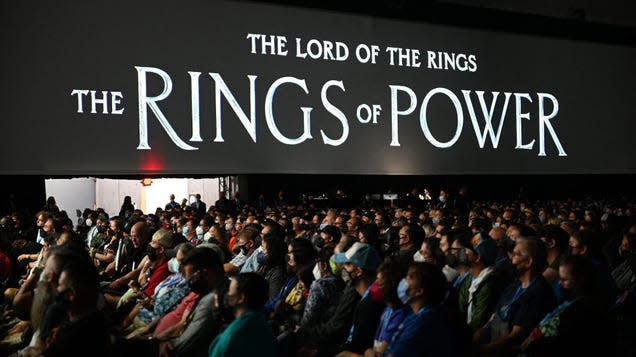 New York (26/08 – 35.29) Amazon Prime Video’s Lord of the Rings series The Rings of Power will begin streaming on Sept. 1, but fans of the franchise will be able to get an early look at their local movie theaters. Amazon will preview the first two episodes of the show at Cinemark theaters worldwide.

However, in order to be eligible for a ticket, customers will first need to join Cinemark’s Movie Rewards program, which offers a free tier, as well as a $9.99 per month tier that offers ticket and concession food discounts.

The last film in the franchise, The Hobbit: The Battle of the Five Armies, made about $55 million during its opening weekend in 2014. Those ticket sales were based on the movie being released in 3,875 theaters, but if reports of the Rings screenings being limited to 200 theaters are accurate, Cinemark’s free one-day event will only represent roughly $2.7 million in potential ticket sales (the theater chain has 521 theaters around the world).

Lord of the Rings’ The Rings of Power is the most expensive original series Amazon has ever produced at $465 million for just the first season. In recent weeks, HBO’s House of the Dragon, which premiered last night, drew more early fan interest compared than the J. R. R. Tolkien property.

Amazon’s decision to debut the series in theaters could help its series close the interest gap by framing it with the trappings of a blockbuster movie premiere, complete with social-media videos of long lines of fans coming to see the episodes. The marketing move also gives the prestige TV property just enough of a whiff of cinematic pedigree to possibly pull in viewers who might have otherwise ignored a straight-to-streaming release.

Unlike competitors AMC and Cineworld (the owner of Regal Cinemas, reportedly in bankruptcy proceeding), Cinemark has fostered a close relationship with streamers, most notably Netflix. In 2021, Cinemark put Netflix’s $200 million film Red Notice, starring Dwayne “The Rock” Johnson, Ryan Reynolds, and Gal Gadot, in its theaters for just one week before it streamed online. A few months earlier, the theater chain also worked with Netflix to release Zack Snyder’s Army of the Dead in theaters just a week before its streaming release.

Kazakh Philanthropist Receives Apology After Fake News
‘Liz Truss is not stupid or thick – I knew she’d be Tory leader,’ says Labour councillor who served with her