Power Cycle in International Politics: Africa’s Role in this Game

Power Cycle in International Politics: Africa’s Role in this Game

Amitav Acharya characterized the current world order as “a world of multiple modernities, where Western liberal modernity (and its preferred pathways to economic development and governance) is only a part of what is on offer”. A world, he adds, of interconnectedness and interdependence, and “not a singular global order, liberal or otherwise, but a complex of crosscutting, if not competing, international orders and globalism”. 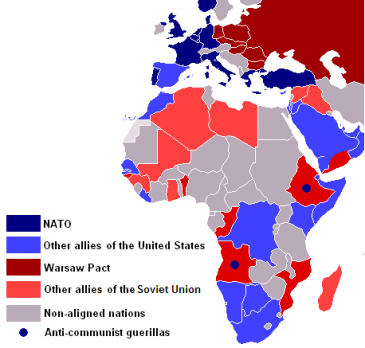 This context pushes us to realize that there is no general agreement on what shape the “world order” will take in the decades ahead.

What is certain, however, is that Western democracy is declining.

By using the Power Cycle theory lens in international relations, we realize that we are currently in the transition phase from a Unipolar system to Multipolar system. As such, we ask the question: what impact would a new international order mean for Africa’s political development?

The Power Cycle theory claims that a state’s evolution involves a generalized, cyclical pattern of ascent, maturation, and descent.

This pattern of growth and decline is explained by changing rates of international economic and political development as well as power. Although every state theoretically is subject to the full cycle of growth, maturation, and decay, many have traversed only a small section of the curve in their entire existence. Power cycle theory asserts that the ability of a state to influence international politics and play a principal foreign policy role is determined in large part by its stage of evolution. Accordingly, as a state gains power in comparison with others, its capacity to exercise leadership expands; and as it falls behind, its ability to influence international politics diminishes. The role of the state is conceptualized within the international system.

The outcome of the Second World War led us into the confrontation between the world’s two superpowers (Western bloc, led by Washington and Eastern bloc, led by Moscow), often known as the Cold War. Hence, in the aftermath of this so-called Cold War, which took place between 1947 to 1991, the USA as a state uniquely “obtained a large share of total power increasingly”, and as consequence, they competed against themselves rather than against other states on the international stage.

From a Unipolar to Multipolar System:  The Cold War Dynamics in Africa

In many cases, the Cold War dynamics involved regime changes and a transition to independent states in Africa

During this first major change in international politics, European countries, such as former colonial power France, were pushed to abandon their territorial countries in places such as Africa.

This allowed suppressed African states not only to seek for their independence, but also to choose in terms of who to align with between the two blocs. In many cases, the Cold War dynamics involved regime changes and a transition to independent states in Africa, and the process often was characterised by violence and political turmoil.

The post-Cold War period, also recognised as the second major shift in international politics in which Western allies increased their power significantly by creating new norms and tools of domination on the international stage. Through Neoliberalist institutions such as the International Monetary Fund (IMF) and World Bank Group (WBG), and their structural adjustment programs, Western geopolitical dominance was extended to more countries in the so-called Third World. This process was characterised by the rise of Western democratic ideology through multi-party elections in regions such as Eastern Europe and newly independent African countries (Non-Aligned).

In Africa, the democratization process completely changed the political arena and the orientation of socio-economic development via economic liberalization and massive privatization across the continent[3]. The unipolar system limited African states capacity via the structural adjustment programmes and created conditions for the rise of new actors such as NGOs and other international organizations to play greater roles in these weak or fragile states in Africa.

In recent years, we have observed the rise of new superpowers such as China, and a return of old players such as Russia on the international stage, thereby posing a serious threat to the United States’ s domination. With a potential shift from a unipolar to multiple polar systems, we may also witness various dynamics leading to the decline or rise of some powers across the globe. Some may even say that we are currently in the transition phase into a new international order called “triangle power” between Western countries led by the USA, against Russia, China, and other players.

What would the implication of this new triangle power be on African countries?

The Role of Africa in the Game

Drawing on historical evidence, it is clear that the political and socio-economic development of African countries is directly linked to world geopolitics, and a changing world order has therefore direct implications on Africa’s current geopolitics. On the other hand, the resourceful continent remains an important player in the international stage. The growing influence and presence of big new players such as China and Russia may allow African countries to have multiple political and economic leverages on the international stage. In terms of choice, African countries seem to be diversifying both their economic and military partnerships outside US, France, and other Western states. Politically, we are currently witnessing a decline in Western democracy and the rise of authoritarian regimes through military coup d’état (e.g. West African states of Mali, Guinea, Burkina Faso and Chad).

… since the period of independence, the African continent has continued to be a battlefield for world’s superpowers …

Through the lens of the Power Cycle Theory in international relations, we can arguably say that since the period of independence, the African continent has continued to be a battlefield for world’s superpowers in their search for total domination on the world’s stage.

However, and we say, however! Poor leadership displayed by the continent’s current leaders may become an undermining factor in utilizing this political leverage successfully. Consequently, the continent may fail to realise its strategic potential on world’s stage, and instead remain again a spectator and non-active political actor.