One of Africa’s richest entrepreneurs, the telecoms billionaire Mo Ibrahim, has criticised developed countries for seeking to dissuade African nations from exploiting their vast reserves of gas. 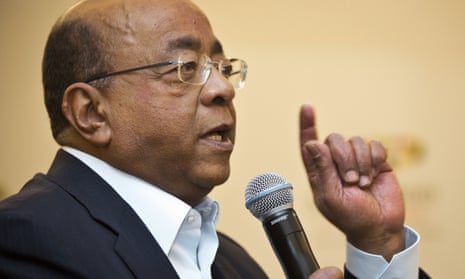 Ibrahim told the Guardian in an interview: “We need a balanced and a fair policy for everybody. Gas can be useful to our transition … [Those who say otherwise] are hypocrites.”

Africa’s gas reserves should be used to bring power to some of the world’s poorest people, he said. “We have 600 million people without electricity. How can we even think of development if people don’t have power? How can we have education, hospitals, business, companies, social life, TVs, tablets, computers, whatever? Development is a major issue for us and power is essential.”

He added: “What you need to ensure is that Africans have some share of their own gas … but we will export, yes.”

Africa’s gas, and the question of whether and how countries can exploit it, will be a key flashpoint at the Cop27 UN climate summit next month.

The continent holds enough gas to raise global temperatures far beyond the 1.5C threshold countries agreed to target at the last UN climate summit, Cop26 last November in Glasgow. Sticking to that goal is likely to mean limiting how much of the gas is extracted, or using ways to capture and store the resulting carbon dioxide – an expensive technology that has not yet been proven at any significant scale.

Ibrahim’s charitable foundation published a report in September that concluded that for Africans to treble their energy use, through gas alone, would add less than 1% to global carbon dioxide emissions.

Using gas for cooking in place of the wood, dung, coal, paraffin and other dirty fuels now commonly used would also save lives in Africa, Ibrahim added. “Nine hundred million people in Africa suffer from unclean cooking – mainly women. What about the pollution effect of that? It’s a serious problem, a health disaster and an environmental disaster. That’s why we need gas.”

Developed countries and civil society groups have sought to discourage African governments from drilling their reserves, some of which are in threatened ecosystems such as the Congo basin.

But as gas prices soar, the reserves are more profitable to exploit, and multinational companies, as well as other interested countries such as Saudi Arabia and Russia, have been exploring ways to invest on the continent.

EU member states have also entered the fray, seeking to import gas from Africa to replace the fuel they were importing from Russia.

“It just seems obscene to me that Europe is running around to find some gas now,” said Ibrahim. “Why can’t we have the same option? Aren’t we the same people?”

Ibrahim, a British citizen who was born in Sudan, rose to prominence as a telecoms entrepreneur, founding Celtel International in 1998, which brought mobile phone networks to 14 African countries where people lacked landline infrastructure. He set up the Mo Ibrahim Foundation in 2006, which seeks to foster good governance and leadership in Africa.

Celtel succeeded by “leapfrogging” landline technology with mobile phones, gaining more than 24 million customers by the time of its sale in 2005. Some civil society groups believe Africa could do the same with renewable energy, leapfrogging gas to move straight to clean energy.

Ibrahim said many African countries were pursuing renewable power, but said gas would still be needed as a “backstop” in this transition.

“The reality is it [the move to renewables] cannot be done in the time needed to do it,” he said, pointing to the variability of renewable energy and lack of battery technology.

He also contrasted the situation in Europe, which is building liquefied natural gas infrastructure to import gas from the Middle East. “If [renewable energy] is valid, why don’t those guys jump immediately and stop using gas? They’re not doing that – they’re building [LNG infrastructure], they’re actually even reopening coalmines. So you’re giving me advice which you’re not following yourself.”

Many Africans in oil-rich nations such as Nigeria have seen little benefit from their countries’ oil riches, but Ibrahim said the same would not be true of African gas. “When corruption was rife in Africa, at the time of the cold war, the situation was conducive to dictators and criminal people. It was much easier to do corrupt stuff. The world is changing.”

His foundation has sought to spearhead this change, for instance by arguing for new transparency laws in developed countries that would make it harder for corrupt politicians to hide their assets.

Ibrahim also confirmed to the Guardian that he had no investments in fossil fuel companies, in Africa or elsewhere.

Kazakhstan ‘chips away’ at its reliance on Russia