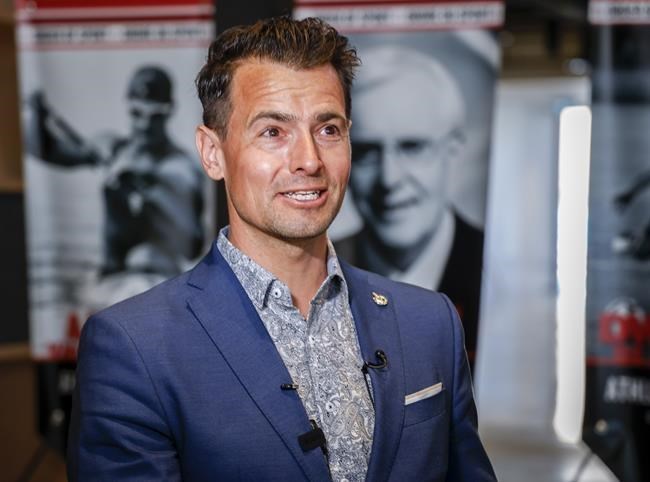 Calgary (The Canadian Press), May 12 (14/05) When Canada takes to the pitch in Qatar in November to play its first World Cup game since 1986, it will be a proud moment for longtime men’s national team member Dwayne de Rosario.

After all, he knows how the sport has grown in this country, and how diverse it has become.

“My sole goal as a young child was to help Canada make a World Cup,” said Rosario, who headlines the group of 2022 inductees into Canada’s Sports Hall of Fame, along with hockey star Hayley Wickenheiser and broadcasting legend, Brian Williams.

“To see us in the World Cup now, yes, I’m not physically a part of it, but it’s still a dream come true. I’m still a fan and I still feel very much a part of the growth and the movement of Canada right now.”

Of West Indian descent, de Rosario grew up in a rough area of Scarborough in Toronto’s east end, back when soccer was considered a white-dominated sport. Barriers as a youth translated to racial discrimination as an adult, which he had to overcome while playing professionally in Germany.

“My father was my biggest supporter, he always told me to never give up, regardless of what the situation is, or what obstacles or hurdles you have to overcome,” said de Rosario, who ranks ninth on the MLS all-time goal scoring list. “If you believe in this, you go after it.”

The diverse make-up of Canada’s national team about to take to the world’s stage speaks volumes about how much has changed.

“It’s beautiful, it’s refreshing, it’s nice to see,” de Rosario said. “We grew up in a very different time, but it’s nice to see that time has now passed. Now there’s a clear pathway for kids. It’s tangible, it’s reachable, it’s achievable. To look and see what our national team is doing, sky’s the limit. “

“The sport of kayaking gave me something to do every day, kept me out of trouble when I was young, and it also created an awesome platform and career,” said van Koeverden, who grew up in North Oakville, Ontario.

McIsaac, born in Winnipeg, has been blind since birth. He’s seen as a pioneer who revolutionized para swimming by becoming the first swimmer to execute a tumble turn, which was made possible by a system developed along with his coaches, who created a foam-tipped rod and used it to tap him on the head as he nears the wall, so he knew when to turn.

That system is now compulsory in competition.

“I never thought this day would ever come,” said McIsaac. “It’s wonderful that Canada’s Sports Hall of Fame is trying to set such a fine example around diversity and inclusion that other organizations could learn a lot from.”

Joining Williams in the builder category was the late Edward Lennie, known as the “Father of the Northern Games”, and Olympic leader Tricia Smith.

Lennie, a respected Inuivialuit Elder, passed away in 2020 at age 86.

“He’d probably say, ‘Finally’. That was his whole dream that it would go this far,” said his son, Hans Lennie, who was at Thursday’s ceremony.

A milestone achievement in his fight to promote traditional arctic sports came when they were showcased for international audiences during the 2010 Winter Olympics in Vancouver.

“When that happened, he sat back and said, ‘Wow. Finally. We did it’,” said Hans. “That was a big weight off his shoulders. Finally it’s being recognized.”

“It was our selection committee that came up with the idea because they just talked about these teams that have really laid the groundwork for all these athletes we induct into the Hall of Fame and how do we recognize them?” said Cheryl Bernard, President and CEO of Canada’s Sports Hall of Fame.

The Rivulettes, from the town of Preston, Ont., dominated women’s hockey during the 1930s with 10 provincial titles and four national titles.

Formed in 1932, fifteen years before Jackie Robinson broke the colour barrier in Major League Baseball, the Chatham Coloured All-Stars team were together for seven seasons, barnstorming around southern Ontario and challenging perceptions of what black athletes could accomplish.

Diversity and inclusion was an underlying theme to the 2022 class and for Williams, veteran of covering the sports landscape in Canada, he says it’s about time.

“This class represents how this country is finally, finally bringing diversity into all facets of life,” said Williams, whose 50-year in broadcasting included covering 14 Olympics. “I’m honoured to meet the ones I didn’t get to know, and Olympians like Hayley Wickenheiser and Adam van Koeverden, I covered them when they competed, it’s just a real honour for me to be included in this very special group of people.”

The class of 2022 will receive the Order of Sport and be formally inducted into Canada’s Sports Hall of Fame on Oct. 6 in Toronto.

‘They were furious’: the Russian soldiers refusing to fight in Ukraine
Michael Suchoba part of organized crime hiding in Dubai?