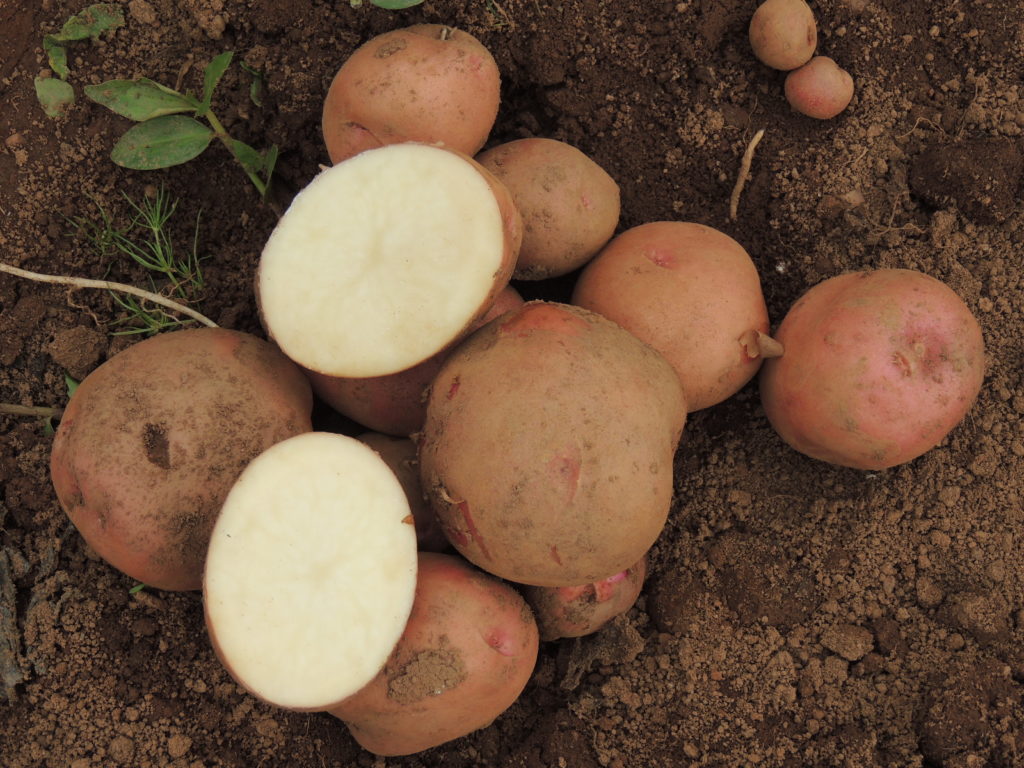 Scientists from NemAfrica, the nematology unit at CGIAR-IITA, and the International Centre for Insect Physiology and Ecology (icipe) are currently assessing new potato varieties that are resistant to the potato cyst nematode (PCN) pest.

These damaging pests significantly reduce yields and tuber sizes and consequently impact farmers’ income and food security in Kenya and the broader East African region. Researchers discovered them only recently as a new threat to potato in the area.

The Kenya Plant Health Inspectorate Service (KEPHIS) received eight new lines of potato in March 2020, subsequently certifying them for preliminary planting and testing under Kenyan agroecological conditions. The scientists sourced the planting materials from the renowned James Hutton Institute (JHI) in Scotland, from crosses made using parents with the H1 gene, which confers resistance to PCN, and the Phureja potato, which have highly desired taste and cooking qualities.

IITA Soil Health Scientist Danny Coyne, who has been leading efforts to assess these new lines, says that besides their resistance to PCN, they selected the specific sequences based on additional attributes vis à vis farmer growing preferences in Kenya.

“We identified early maturing lines that have a short dormancy, which are key characteristics of Shangi, the most popular variety currently being grown by farmers, as well as being high yielding compared to the current local varieties,” says Coyne.

Scientists developed the lines as part of a breeding program for use in the UK. The researchers selected them for trials in Kenya because of their low dormancy, which Kenyan farmers prefer. Prof. John Jones (JHI), a PCN expert, had recently visited IITA and icipe to help identify the PCN and recognized that these lines might be useful, as they resembled Shangi.

Innovate UK, a UK Government innovation agency, provided funding to facilitate the procurement, processing, and assessment of the new lines. IITA staff, in cooperation with KEPHIS, established contained field trials to test the performance of the new lines under varying levels of PCN infestation, alongside the local variety Shangi.

Jesse Kamutu, a potato seed and tuber producer from Kinangop in Nyandarua County, who assisted with the trials, echoed those sentiments. “Farmers in our area have been abandoning potato farming for other crops,” he says. “This is due to decreasing yields and poor quality of tubers;” he continues, “we did not (even) know why until we were shown the PCN pest.” PCN is a minute microscopic worm that feeds on and damages the potato roots. PCN is among the most damaging pests of potato, and because they are new and unseen, farmers did not associate PCN with the decreasing potato yields.

The local Shangi variety, commonly planted by farmers across Kenya and some parts of East Africa, has no resistance against PCN and is being ravaged by the pest. Authorities estimate that the pest has reduced potato productivity in the region by more than 40%, digging deeper into farmers’ income. From the field trials, the new lines far outperformed Shangi in overall yield, within a maturity period desirable to the farmer.

IITA Postgraduate, Harrison Mburu, who is finalizing his master’s study at Jomo Kenyatta University of Agriculture and Technology (JKUAT), is directing the field trials and is very impressed with the outcome from the introductory planting in high altitude areas in Kenya. His master’s study has demonstrated the damage caused by PCN and the need for PCN-resistant varieties that farmers like. Resistant varieties that are similar to Shangi, therefore, would be a good start, he said.

In late August, the IITA team organized a visual and taste test with farmers in Munyaka and Gathara areas of Kinangop. Farmers judged the different tubers on display without knowing which were the new lines. Based on texture, shape, the taste of cooked potato as French fries/chips, mashed and boiled, and the amount of time it takes to cook, the farmers’ responses will help the team to select the most preferred lines to multiply and develop into planting varieties.

However, initial interest from these tasting events has already stimulated excitement, with some farmers showing a preference for the new lines and offering their farms to multiply the seeds at large scale.

According to Dr Solveig Haukeland, Nematologist (icipe), identifying a new variety that is resistant to PCN, early maturing, gives a good yield, and is highly regarded on the market will change the fortunes of potato farmers in the region. The team is currently assessing the lines for resistance to other diseases in Kenya.