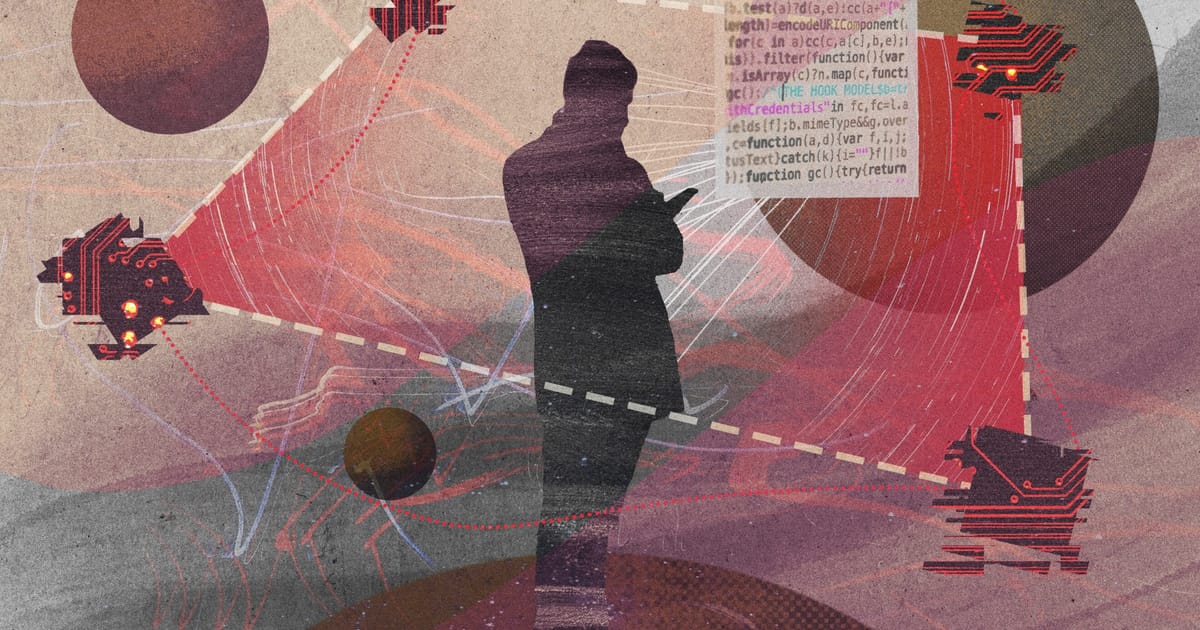 As founder of the privacy-focused search engine Qwant, Eric Leandri was fond of citing the Universal Declaration of Human Rights. The self-styled European tech champion has mentioned the landmark United Nations document in interviews at least a dozen times since 2017.

“I love human rights,” Leandri said in September 2021, referring to the section in the declaration guaranteeing the right to privacy. “With my company, I’ve always fought for Article 12 and the right to a private life.”

These days, however, Leandri is in a different line of business. Even as he spoke those words, his new company Altrnativ had grand ambitions to sell its services to African countries with histories of human rights abuses.

Internal Altrnativ documents seen by POLITICO contain pitch decks with the company’s logo offering the governments of Benin, Chad, Cameroon, Comoros, Gabon and the Republic of the Congo a range of cyberweapons. Some include a backpack-sized device capable of tapping and tracking phones up to 10 kilometers away, a bulk-surveillance tool capable of monitoring internet communications on a large scale and malware capable of taking over a target’s smartphone. Altrnativ also prepared pitch documents offering other services, equipment and intelligence training to governments in Ivory Coast and Senegal.

Leandri’s activities in Africa offer a glimpse into the booming cyberweapons trade on the continent, as peddlers of digital weaponry scramble to secure contracts with repressive governments. They also reveal how his company recruited former French officials, as it sought business in the French-speaking regions that once made up the country’s colonial empire.

It remains unclear whether these countries bought and used these tools, but “this kind of tech is a huge aid to autocrats seeking to remain in power,” said John Scott-Railton, senior researcher from the University of Toronto’s Citizen Lab, which studies digital espionage. “The price is going to be paid by citizens of these African countries who are going to be constantly surveilled and monitored.”

When contacted by POLITICO, Leandri acknowledged taking part in pitches to African countries, but insisted his company only offered a platform analyzing publicly available data, and that Altrnativ’s products were simply part of a larger package.

“These are not our offers,” he said. He added that unspecified partners included Altrnativ’s products to their offers but that he had no control over it. He declined to specify what partners he was talking about.

Leandri expressed his interest in Africa at a cybersecurity conference in Paris in June 2021. He had just returned from a visit to Ivory Coast and had come away impressed.

“The technologies we have in Europe today will really have an impact that could change our way of participating in the growth of a continent that, let’s remember, was connected to nothing and that is now hyperconnected,” he said. “This is where our know-how, our European values, our logic, make it possible to provide sovereign technological solutions that we can deploy there and have a real impact.”

Leandri plays down his company’s role in selling sophisticated cyberweapons to African countries. But around the time these pitches were made, he was already working with senior former French diplomats and officials with experience in the region or connections within the French establishment.

In 2020, Altrnativ hired Gérard Errera, a former ambassador to NATO and the United Kingdom who is now senior advisor to the Blackstone Group France and works as a consultant for American, Chinese and French companies. “I advise him where I can be useful,” Errera told POLITICO, adding he was still working with Altrnativ but had no role in connecting Leandri with African countries.

According to two people who have previously done business with Altrnativ and several former employees, the former head of France’s homeland intelligence services Bernard Squarcini was often seen in Altrnativ’s offices. A representative for Squarcini said the former spy chief met with Leandri on four to five occasions but that the two were “never in a business relationship.”

“It was rather a question of enlightening him on the French institutional inner workings, about those in power in different services for which he wanted to be authorized to work, or on the organization of certain African countries where he seemed to want to expand,” the representative said.

The documents show a team of executives from Altrnativ met with Cameroon officials in March 2021. They don’t specify who was in the delegation or where the meeting took place, but they show Altrnativ had its first audience with the President’s office of Cameroon on March 22, 2021, according to two letters seen by POLITICO.

The trip was followed up less than a month later with a 200-page pitch document and a 60-page PowerPoint presentation. The longer pitch was presented under the brand name Metalexport-S (MEX), a weapons supplier headquartered in Poland with a subsidiary in the United Arab Emirates, and included Altrnativ’s product and logo. The logos of both companies appear at the top of every page of the PowerPoint.

In the metadata of the documents seen by POLITICO, the author of the 60-page presentation and the last person who saved the 200-page pitch is “Thierry Carbou.” That is the name of a French-Canadian arms dealer of Cameroonian origin. On at least one social media account, Carbou identifies himself as based in the UAE and as an adviser to the Board of MEX since January 2017. He is also CEO of Abu Dhabi-based Saarem LLC, which describes its business as “integration and supply of ground, airborne advanced equipment, solutions and exclusive combat training,” and president of Legion Group, another arms company. POLITICO contacted both MEX and Saarem but received no reply. A direct query to Carbou also went unanswered.

On their websites, Legion Group and MEX offer the same equipment and use virtually identical language to describe a cornucopia of ammunition, tanks, air defense systems and guns for sale.

The pitch documents described Altrnativ’s custom search engine “Targets,” which it claimed could provide information on people, including geolocation data, and use publicly available data to draw connections between places, people and entities.

It also detailed a series of cyber surveillance tools. With names like “Arrows,” “Alpha” and “Cerebro IDPR,” the various cyberweapons for sale included devices deployable in a car, boat or airplane that could monitor all voice calls in a five kilometer to 10 kilometer radius, ping a phone to determine its location, monitor internet connections from a large number of people, tap into local telecom networks or monitor encrypted apps like Telegram or WhatsApp.

The products on offer include some of the biggest brand names in interception tools. Cerebro is the name of a tool produced by Nexa Technologies, a cybersurveillance firm that was indicted in France in October for “complicity in acts of torture and of enforced disappearances” after it sold its products to the Egyptian government. In a statement, Nexa Technologies said its sales had received export control approval from the French government. It said it had not done business through Altrnativ and had stopped selling Cerebro in June 2021 (the Altrnativ pitch document offering the tool was drafted before that date).

Trovicor, a producer of “lawful interception and intelligence technology” whose name is peppered through the 200 pages pitch document, told POLITICO it was not aware of an offer related to Cameroon. “We know of Altrnativ but have never completed any business with them and do not have any formal relationship,” the company said in a statement. “We do not know of MEX (Metalexport-S) and have no relationship with them.”

The Altrnativ documents don’t contain evidence Cameroon bought any of these cyberweapons. But they do contain an OSINT report on the country’s Finance Minister Louis-Paul Motaze. It’s unclear who, if anyone, commissioned the report but its stated purpose was an attempt to “uncover corrupt practices or insider trading orchestrated by Mister Motaze.”

The documents offer no evidence of such practices beyond a series of media articles alleging corruption involving Motaze — a relative of and possible successor to Cameroonian President Paul Biya. Motaze did not reply to a request for comment.

The 16-page report, dated June 2021, lists the minister’s social media accounts on LinkedIn, Instagram, YouTube and Flickr, as well as those of his wife and children.

Cyberweaponry is a rapidly growing industry, with the potential for serious abuses. In Europe, recent spyware scandals have rocked Greece, Spain, France, Hungary and Poland.

It’s unclear from the documents to what extent Altrnativ’s Africa ventures were successful. As of September 2021, Altrnativ documents show the company expected to receive millions of dollars in contracts from African countries.

Beyond Cameroon, Altrnativ prepared similar pitch documents, offering cyber surveillance tools to the governments of Chad, Comoros, Benin, Gabon and the Republic of the Congo, also known as Congo-Brazzaville, all of which have histories of human rights abuses.

The government of Cameroon has cracked down on international NGOs and political dissenters according to Human Rights Watch. It’s also no stranger to digital suppression. Between 2017 and 2018, the country shut down the internet for more than 230 days.

According to the U.S. state department, human rights abuses in Comoros include torture, arbitrary detention and “the worst forms of restrictions on free expression, the press, and the internet.” The state department also says there have been “credible reports” in the Republic of the Congo of “unlawful or arbitrary killings, including extrajudicial killings by the government; torture or cruel, inhuman, or degrading treatment or punishment by the government.

Benin has seen recent crackdowns on free speech and repression of political opponents. The 2016 elections in Gabon were marked by violence after the reelection by a slim margin of Ali Bongo Ondimba, whose family has held power for more than five decades.

“We are in a very risky phase now,” she added. “People cannot keep up with what technologies can do. What we need is a lot more transparency, scrutiny, accountability.”

Officials from Benin, Chad, Cameroon, Comoros, Gabon, the Republic of the Congo, Ivory Coast and Senegal did not reply when contacted for comment.

Asked whether France was aware of Leandri’s African business, the Elysée did not reply to a request for comment.