Sales of drones and other arms to African nations are booming after Turkey signed military cooperation deals with dozens of governments on the continent. DW examines why so many countries are turning to Turkey for arms.

Turkey is stepping up its security footprint in Africa after over a decade of strategically expanding its economic and cultural influence on the continent. The government has recently inked a number of security agreements, particularly in West Africa, and arms exports to Africa have exploded.

Turkey’s share of Africa’s arms market is still tiny at 0.5%. But the rapid growth of defense sales is “striking,” according to a 2022 study on Turkey’s security diplomacy in Africa by the German Institute for International and Security Affairs (SWP).

Against a backdrop of growing Islamist insurgencies in both East and West Africa, as well as domestic conflicts, governments are upping their defense spending. Turkey is proving a reliable alternative to traditional arms exporters, such as Russia, China, France and the United States.

The media aide to Nigerian President Muhammadu Buhari praised Turkish defense technology in a statement in late 2021, saying it would accelerate efforts to rid the country “of pockets of terrorists and the menace of kidnappers and bandits.”

African nations are most interested in buying Turkish-manufactured armored vehicles, naval equipment, infantry weapons and drones, according to the SWP study. 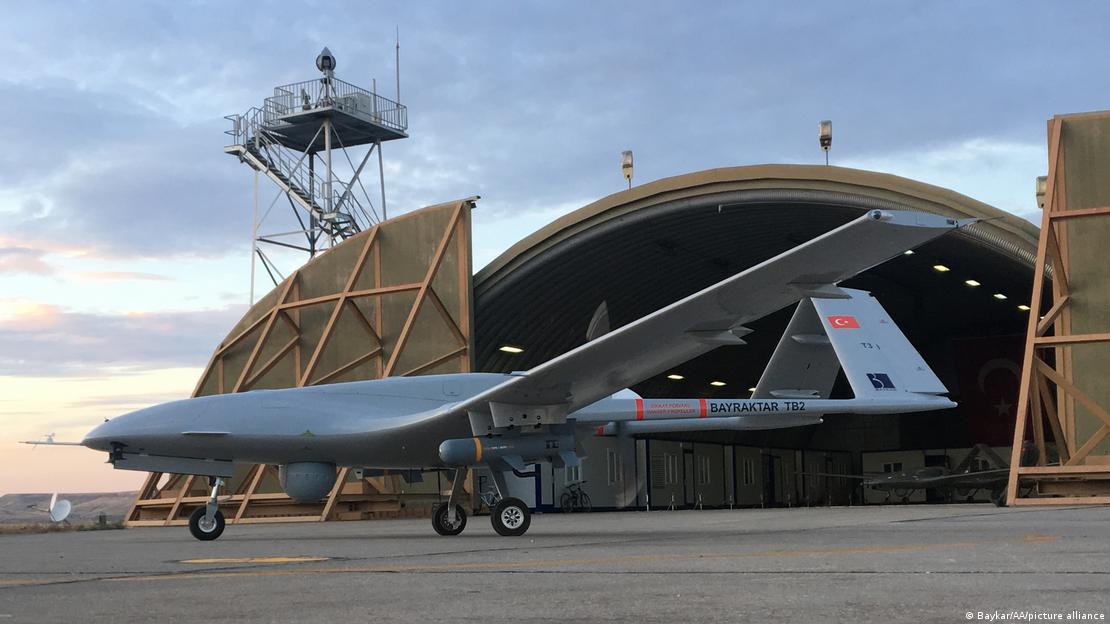 Why are Turkish-manufactured drones so popular?

“In Africa, wherever we went, they asked us for unarmed and armed drones,” Turkish President Recep Tayyip Erdogan said after returning from a 2021 trip to the continent.

African nations that have already taken delivery of Turkish-manufactured drones include Somalia, Togo, Niger, Nigeria and Ethiopia — although the drone sales to Ethiopia have attracted Western criticism after the government used them to attack civilians in the Tigray conflict.

Turkey’s drones are cheap compared to US or Israeli versions and easy to operate. But a big selling point is that they are battle-proven, said Yunus Turhan, an analyst of Turkey Africa relations at Haci Bayram Veli University in Turkey.

Turkish unmanned aerial vehicles (UAVs) have been used “very effectively” in Syria, Libya and in Azerbaijan’s breakaway region of Nagorno-Karabakh, he said. Most recently, the Bayraktar TB2 armed drones have gained fame in Ukraine for destroying large numbers of Russian tanks.

For Turkey, Africa is potentially huge market for Ankara’s emerging defense and aerospace industry, which boasted some 1,500 companies in 2020 compared to just 56 in 2002.

Turkey has signed military-related pacts with the majority of African countries, mainly in West and East Africa (as shown in the map below). While the deals vary in scope, they can include technical visits to research centers, personnel exchanges between institutions and companies, and training.

Its longest-standing involvement is in Somalia, where Turkey operates its biggest foreign base, Camp TURKSOM, and where the Turkish government has boasted of training a third of Somalia’s 15,000-strong army in the fight against al-Shabab.

Nigerian military personnel have also undergone combat drone instruction in Turkey, while Ankara has been training Kenyan police officers since 2020.

Turkey’s experience fighting counterinsurgency is welcome, and, as a Muslim-majority nation without colonial baggage, it enjoys a high level of trust on the continent, Eguegu said. Plus, because of its NATO membership, deepening ties with Turkey comes at “a low diplomatic cost” for African countries.

Erdogan, who has visited more African countries than any non-African leader, has even redefined Turkey as an “Afro-Eurasian state,” Eguegu pointed out. “By connecting its identity with Africa, it’s a way to make itself almost a neutral partner of African countries.”

But it’s in the terrorist-hit Sahel countries in West Africa and Central Africa where Turkey is making its latest push to extend its influence.

Turkey gave the G5 Sahel Joint Force (made up of Burkina Faso, Chad, Mali, Mauritania and Niger) a $5 million contribution for the fight against terrorism in 2018.

It has since signed military cooperation and defense agreements with Niger, Nigeria, Togo and Senegal.

“We see these types of requests from West African countries, because they have huge security challenges across the Sahel, where lots of countries aren’t in control of large swaths of their territories,” Eguegu said. 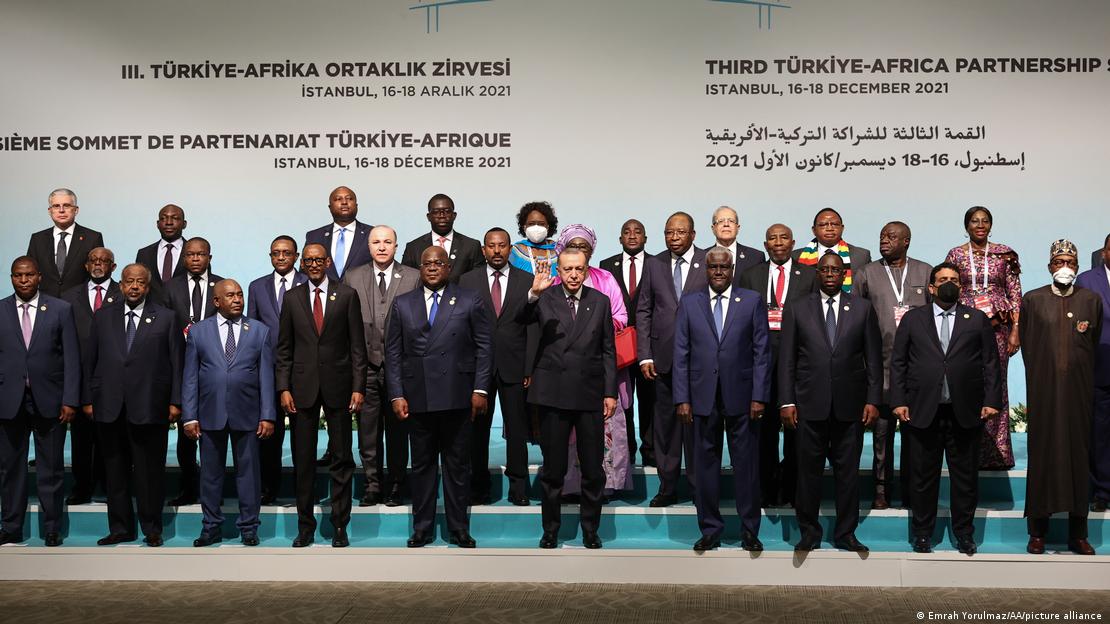 Military cooperation not only solution

The 2021 Turkey-Africa summit attracted 16 African heads of state and more than 100 ministers.

This shows that the continent is increasingly attaching strategic importance to Turkey, said Senegal-based peace and security analyst Aissatou Kante, a researcher at the Institute for Security Studies, an African think tank

Though African nations are obviously interested in diversifying their partnerships, including in the security field, Kante said there was a danger in seeing defense agreements, such as those signed with Turkey, as the only solution to Africa’s security crises. 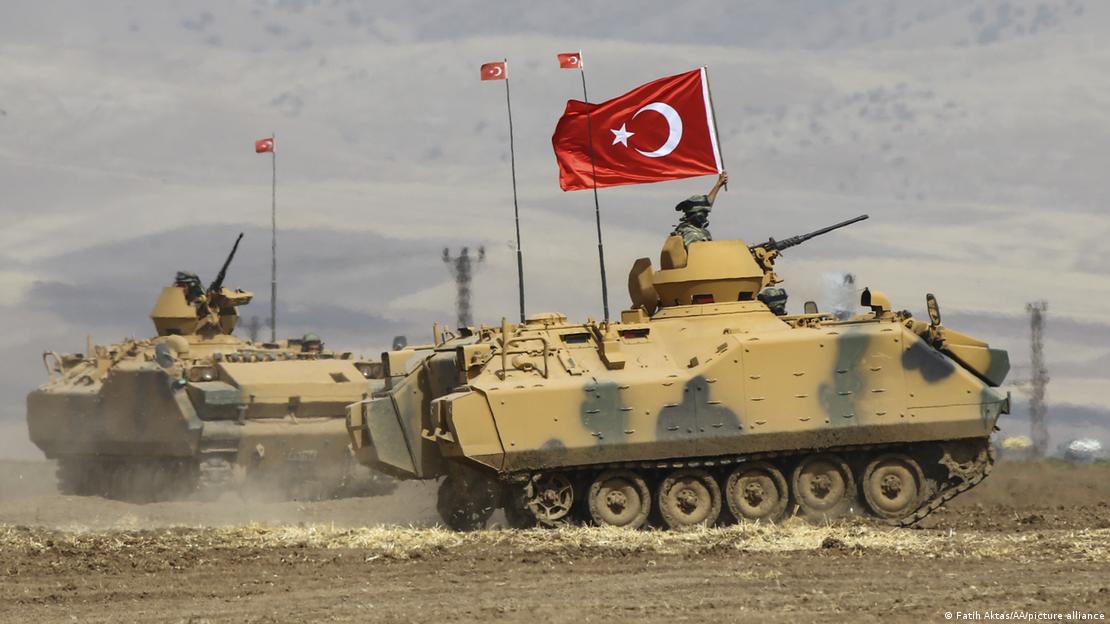